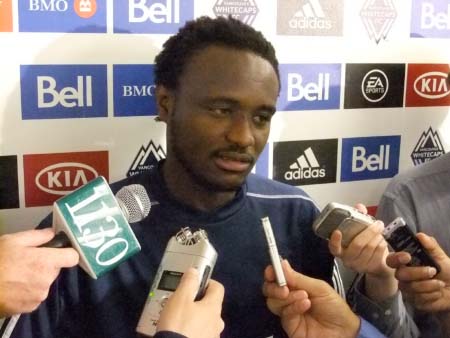 Mustapha Jarju is a Gambian professional footballer who currently plays for K.S.K. Sporting Hasselt as a secondary striker.

Jarju is often used at the left wing for Hasselt and is contracted to the Belgian club until 30 July 2018.

Born to parents of a humble background in the Kombo North Village of Wellingara in The Gambia, Mustapha never found life as a footballer on a silver platter.

Like most of the ex-Scorpions stars, notably former captain Jatto Ceesay, (arguably the most gifted Gambian footballer ever, who had a glittering career at William Telburg when he led the Deutch side at the UEFA champions League in 2002), Mustapha has struggled to make an impact in a Scorpions shirt.

But the combative midfielder’s sense of perseverance and a never-say-die attitude earned him recognition as one of the most outstanding footballers to have ever graced the beautiful soccer on Gambian soil.

At the top of his form, he was a joy to watch. Indeed a special talent admired by team mates and fans alike.

Only few Gambian professionals would shoot themselves in the same height as the former Scorpions midfield kingpin Jarju.

The aggressive midfielder was best known for his mastery of passes in the heart of the midfield, goal-scoring technique, long range free kicks and amazing dribbling skills.

The former Steve Biko and Wallidan midfield sensation Mustapha, who goes by the sobriquet (Toubabou/Whiteman in Mandinka), started on his road to becoming one of the most recognizable footballers in the country when he stormed the popular Nawetan Zones with fantastic displays at both Lamin Lodge and RB of his native Wellingara.

His growing reputation as a good player attracted then second division side Rising Stars of Fajikunda, who quickly recruited him in their ranks.

Toubabou proved too good for this relatively small club. Shortly afterwards, Wallidan came knocking and what happened after his transfer to the blue boys football club, (Wallidan), still remains a talking point in everyone’s lip.

His brilliant skills earned him the captain’s armband for the famous Gambia U-17 squad during the 2003 peace football tournament, organised by former President Yahya Jammeh. The tournament was part of events marking the July 22nd anniversary celebrations.

Jarju kept hold on to the captain armband and led the then baby Scorpions to the African U-17 preliminary rounds and further aided the team to the championship in Swaziland.

The young versatile midfielder who can even play as a striker made unsuccessful trials with several clubs in the United Kingdom, namely West Bromwich Albion, Portsmouth and Southampton before he returned to The Gambia.

He almost became a player from French first division side Auxerre but an alleged disagreement over transfer fees meant the deal would collapse.

Jarju’s success began after he was contracted by Bakau giant killers Steve Biko, who later sent him to the then Belgian top tier club Lierse S.K. where he signed a 2-year contract alongside former Steve Biko and Scorpions team mate Assan Jatta alias Bierhoff.

Like dust to water, Toubabou went on to settle brilliantly with life at Lierse. In a spectacular Lierse debut in 2006, Jarju netted nine goals in his first full season at the club, although his effort was not good enough to prevent the Belgian giants relegating to the division two of the Belgium league.

His remarkable career also took him to R.A.E.C. Mons, Hatta club, Irtysh and major league soccer side Vancouver Whitecaps in the United States.

The Gambian international also captained the national U-20 side through qualifiers but could not feature in that tournament as he was overage.

He has earned several caps with the senior national squad and scored the country’s only goal against a European side Luxemburg.

National Volleyball League set to start in May