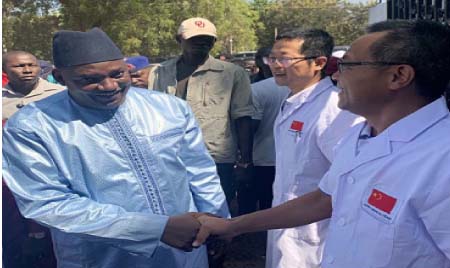 A team of medical doctors from China on Monday began a two-day free medical treatment to over four hundred patients that are suffering from different ailments in the rural Gambia.

The free medical treatment which was held at the Bansang Hospital in the Central River Region also attracted patients from Upper River Region and some part of the southern Casamace, Senegal. Officials said the event would also strengthen the already existing bilateral relationship that exists between the countries.

Bansang Hospital is one of the busiest hospitals in the rural Gambia and the country at large. Hospital officials said in 2018 alone, the hospital’s out patients department received more than 74, 000 patients, hence the support of the China Medical Team would go a long way toward addressing the demands of inhabitants within the area.

Aba Sheriff Sanyang, the regional governor of CRR said it’s very gratifying to have a team of Chinese medical doctors in the hospital taking into account the number of patients that visits the hospital daily.

“Coming out to the rural people and help them in improving their health status is a very gigantic step in the development of this country because the rural people are mostly the famers among others. Therefore, if they are healthy you are given them more strength to be able to produce more and support the urban area.”

The hospital, he added, is serving a lot of people within the regions and some neighbouring countries and that it’s the first point of call in the rural Gambia.

“Any accident from here to West Coast Region they will run to Bansang Hospital and beyond Bansang which is Basse will also come to the hospital. Women that have some major complications will also first rush to the hospital, hence there’s need to have permanent Chinese doctors in the hospital.”

Governor Sanyang, further described the bilateral relationship between the two countries as cordial as always, further expressing hope that it will continue.

The head of the medical team, Dr. Liang said the purpose of their visit is to conduct free medical treatment to communities of the area.

The medical team, he explained, comprises of 10 doctors and that they are divided into various groups ranging from Obstetrics, paediatrics, and group of traditional medicine among host of others. This, he added, would enable them to attend to most of the patients visiting the hospital during the medical treatment.

The Chief Executive Officer of the Hospital, Baba Jeng, described the move as another milestone in the history of the hospital, saying the hospital is known to be the Chinese hospital.

“The Chinese were in the hospital about 15 years ago. And for them to come back to the hospital and strengthen that relationship, I think it is something that is commendable and it’s important to the hospital’s management and thousands of patients that are visiting the hospital on a daily basis.”

He revealed that the team will also be donating some medical equipment on Tuesday to the hospital. “We want the existing relationship between the hospital and China Medical Team to grow further for the fact that the hospital is strategically located  and it’s covering over 600, 000 inhabitants within and outside the country.”

He said they sometimes see people that come all the way from Guinea Conakry, Guinea Bissau and neighbouring Senegal.

“The hospital management really appreciated the two days free medical treatment. Therefore, I’m appealing to your government to help us with permanent Chinese doctors in the hospital,” he said.

CEO Jeng disclosed that the hospital is lacking so many specialists in difference areas.

“If the hospital has some Chinese doctors it would go a long toward addressing the much-needed medical services in the region.”

Dr. Peter Tong recalled that the relationship between the two countries dates back some decades ago, adding that they are the third recent medical team that are in the country working towards improving the country’s health sector.

Bruma Badgie, the hospital’s administrator also spoke at length on the importance of the free medical treatment.

“Patients will now have an opportunity to be seen by doctors who are specialists. I’m optimistic that some of the issues that is affecting them will be address.”

Fanta Touray from Ndorna Village in Upper Fulladou, thanked the visiting medical team for the support and urged them to continue such humanitarian gesture. 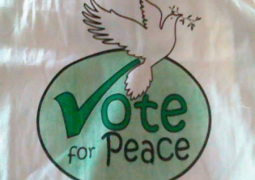