We join the rest of the country to pay homage to a man described by many as a true patriot who had worked hard for the country.

Late Fr.Marcel Jinage Badji is indeed an industrious son, who is described by many as someone who had uplifted the lives of many.

Marcel Jinage Badji died recently and was laid to rest in Bwiam on Tuesday December 1st with thousands of sympathisers in attendance.

The late Marcel Jinage Badji was born on 21st May 1951 in a village called Allakunda in Foni Bondali District. He attended schools in Bwiam and ended up at St. Augustine's High School.

He entered College in 1970 and was trained as a teacher. He taught in Basse for four years and then to Saint John Vienney Primary at Bullock in 1977. He became a Headmaster in the same school. In 1986, he became Deputy Headmaster at St. Edward's Primary School in Bwiam.

The late Marcel Jinage Badji then moved to work with Fr. Philip Crowe in the St. Joseph's Family Farm Centre in Bwiam in 1993, and rose through the ranks to become the Director after a few years, a position he held until his death. He studied in Ireland at Kimmage Manor and obtained a Diploma in Development.

Many have described him as a man of high integrity, deeply dedicated and committed to his duties and responsibilities.

The praise he received after his death alone speaks volume of his charisma.

According to family sources, the late Badji had lived a fruitful life, dedicated to the service of God.

We encourage each and every Gambian and non-Gambians living in the country to emulate this great man.

Once again, we pray that his soul rest in peace. 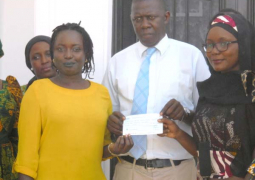