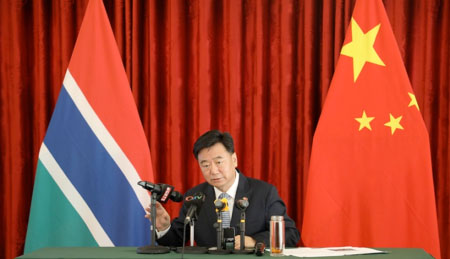 His Excellency Ma Jianchun, the ambassador of the People’s Republic of China to The Gambia has said that the Chinese government considers the health of foreigners, including Gambians, living in China, as equally important as that of Chinese citizens.

Ambassador Jianchun made these remarks on Monday at a press conference held at the Chinese Embassy in Bilijo in an effort to update the media on developments of the outbreak of the novel pneumonia (COVID-19) as well as efforts in place to contain the outbreak.

He also gave information on coordination and cooperation between China and The Gambia on jointly preventing the outbreak in The Gambia.

He highlighted that active measures have been taken to prevent foreigners living in China from infection, and enormous efforts have been made to meet their basic life needs during this trying period.

He expressed sadness for those who lost their lives due to infection, and shared the grief of their families and friends.

He also expressed optimism that they are already on the winning side, as positive developments have been taking place.

He noted that in the past month, they had worked closely with the Gambian government and its development partners to prevent an outbreak and ensure the health of Gambians at home.

He added that to complement Gambia government’s efforts in preventing COVID-19 and in strengthening the public health system, they prepared a batch of medical equipment and supplies granted by the Chinese arrived at the Banjul Port two weeks ago, and will soon be handed over to the Ministry of Health.

“To our relief, as of today, no Gambian national has been infected. And the Gambian government followed , took proper preventive actions while staying away from any unnecessary trade and travel restriction.” He observed that during this arduous battle, the Gambian government and people have been demonstrating sympathy, solidarity and support to China.

He remarked that, “the COVID-19 is not yet considered a “pandemic” by the WHO; it is not an “incurable” disease, and it is not difficult to prevent especially for countries and regions far away from the epicenter, as long as basic preventive measures are taken”.

“The novel is not “Wuhan virus,” it is not “China virus,” and no evidence has shown that the epidemic came from ,” he clarified. He added it is not constructive to scare and divide people at this moment, and doing so is not helpful at all for preventing and controlling the outbreak.