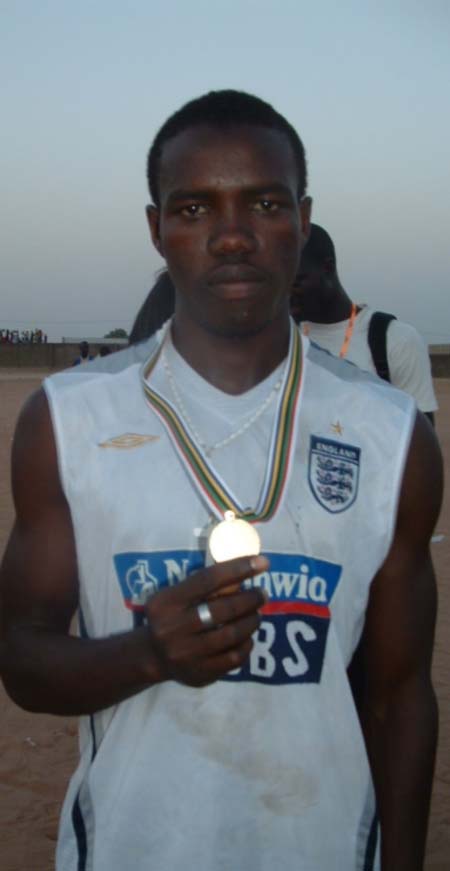 Could Obega be a national concern? This young promising athletic showed his talents to the nation during the just concluded inter-schools athletics championship held at the Farafenni Mini Stadium in North Bank Region.

Echen Obega, who was the only student representing his school Kombo Kerewan Upper Basic School, won almost all the meters he competed for, which led him to achieve three gold medals and one silver medal at the end of the event.

This could however, be seen as a battle for senior schools principals to grab the talented young athlete, being waited to be seen for more gold achievements in the future.

Speaking to reporters during the competition in Farafenni, Obega said he was able to achieve the medal through effective and continued training he was dedicated to.

Despite being the only student who represented his school at the national inter-school championship, he said: “I was so scared in day one of the event seeing many representatives from each school, and realizing that I was the only one from my school, I did not have lunch before I came to the stadium, but I turned a blind eye on the fears and had to do what I could for myself and my school.”

With smiles on his face, he told journalists: “I prayed to God for my achievement with hard work.”

Obega, who took part in the inter-schools competition for the first time, said he hopes to make a difference in future competitions.

He thanked his parents and school authorities for the opportunity given hi, to participate in the sports.

Regarding his senior school of choice, he says “there has not been any final decision yet”.

The grade 9 student competed for 500m during the competition and came out second in both the 800 and 1,500m race.

During his hits in the preparation for the inter-schools competition, he said he conquered the 1,500 as well coming out second in the 5,000 and 800m.

The young athlete helped his school secure 30 points during competition.

We Will Do Everything Possible To Clinch Zonal Championship -BYSC Prexy