One Ousman Jarra was recently convicted and sentenced to serve seven years in prison with hard labour by magistrate Lamin Mbai of the Bundung magistrates’ court.

According to the particulars of the offence, some time in 2014 at Brusubi village in the West Coast Region, the convicted person broke into the house of one Haddy Jallow, and stole clothes and jewelry valued at D250,000.

Based on the convict’s own plea of guilt, he was convicted and sentenced to the above jail term.

Previous:
US citizens missing in Gambia for one year
Next:
Man arraigned for obtaining money by false pretence 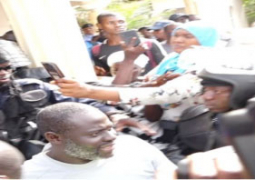