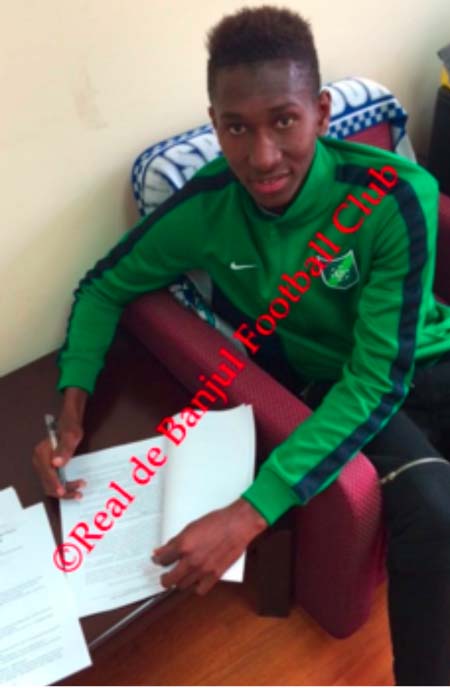 Real de Banjul Football Club is delighted to announce that Bubacarr ‘Steve’ Trawally has signed for Hangzhou Greentown for an undisclosed fee.

Trawally signs a long-term contract with the Chinese Super League club after a successful season with Real de Banjul, where he became the club’s and league’s leading goal-scorer with 12 goals.

Winning two Gambia first division titles and one Super Cup title, Trawally was rewarded for his superb performances by being named the best player in the league.

The 20-year-old, who played predominantly as an attacking midfielder for Real de Banjul, was also an able deputy on the wings when required.

On Steve Trawally’s departure, President William Abraham said: “Steve’s contribution to Real de Banjul Football Club was absolutely outstanding. His performances over the past seasons have been a major part of the club’s successes during this time, as he has created so many goals from midfield.”

“Steve is a winner and always gave absolutely everything when he played for this club. He is an intelligent player and always combined this well with his fantastic fighting spirit. We thank him for his contribution, and wish him well in China and the future.”

Trawally, who assisted The Gambia U20’s only goal in the 1-0 win over Liberia last April, told www.realdebanjul.gm from his base in Zhejiang:

“There comes a day when you realize that turning the page is the best feeling in the world. Life is a journey and everyone’s dream is to move on to a higher level.”

“I have been dreaming of this day all my life, but I must say I am having mixed emotions as I am literally very sad that I am leaving the team where I started almost everything concerning my football career, and achieved trophies with them and individual prizes.”

He added: “However, it’s a dream come true for me having to sign a new contract and moving to the next level of my career to becoming a professional football player. This opportunity is every young player’s dream, and I am blessed to have it.”

“Joining Hangzhou is a big step for me because being a professional is not an easy task; however, I am ready for any challenge that may come my way. I am extremely happy for myself and I would like to say a big thank you to the Real de Banjul Executives, Staff and my teammates. Without them, I wouldn’t have been where I am today.”

Trawally also reserved some praise for his family and fans for the support he has received throughout his career saying: “My family, friends and fans, thank you very much for believing in me from the start and dedicating all your time and money to come and watch me play, I can never thank you enough.”

Being a young player, he also had some words of encouragement and advice for the young players: “An advice to every young player out there, remember, ‘only you can make your dreams come true’.”

Hangzhou, which finished 12th in last season’s Super League, are currently coached by the former CS Sfaxien coach Philippe Troussier, who led Japan to the last 16 of the 2002 World Cup and is known as the “White Witchdoctor” for his coaching stints in Africa, including the national teams of Ivory Coast, Nigeria, Burkina Faso and South Africa.

Everyone at Real de Banjul would like to thank Steve for his fantastic contribution to the club and wish him the best of luck for the future and in his career. Source Realdebanjul.gm

OVER THE EDGE: LEGALITIES OF LIFE, OUR CHOICES AND OUR FUTURE - Modern Day Unions