The Brufut Marathon Association, in collaboration with Brufut Youth and Sports Development Committee, has set up a taskforce committee responsible for the coordination of an Inter-Ward Football Competition scheduled for March 2012.

Brufut, which is divided into ten wards, will give the bigger wards two teams and will be named team A & B as part of the tournament. The wards are: Sateba, Sanchaba and Santo-su Team which will have two teams A & B due to their large sizes.

The others that will produce single teams are Ghana Town, Nyfullen, New Town, and Wullingkama.

The aim and objective of the tournament is to make better selection of a Brufut Town Team and bring unity among the youths of Brufut. The town team selected would be supported by the community and well-wishers.

The competition is aimed at selecting only players in Brufut to further develop their skills.

Sponsors are kindly invited to support this initiative for the development of grassroots football in Brufut. 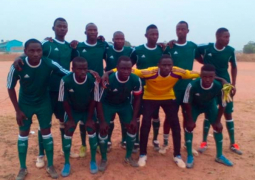