Sukuta Association for Blood Donors, in collaboration with Banjul Blood Donor Association, recently embarked on a road show campaign, walking from former tipper garage, to Sukuta Health Centre to sensitize the public on the importance of blood donation.

Speaking to journalists, at tipper garage, Aminata Sarr, programme manager of the National Blood Transmission Service, under the Ministry of Health and Social Welfare, said the main objective of the road show is to sensitize the general public on the importance of blood donation.

Blood is very vital in the human system, she says, adding that they are very impressed with Sukuta Health Centre for having an effective blood bank, and “any time one needs some blood from Sukuta you can easily have it”.

Blood is not for sell, she says, while urging the public, mostly the healthy youths, to join the association to donate blood.

The association was set up to eradicate blood shortage in The Gambia to save lives, he said: “I urge the general public to donate blood for the purpose of serving humanity because the life you save may be your own.” 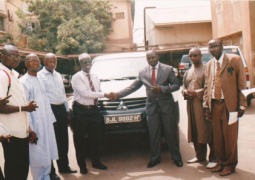