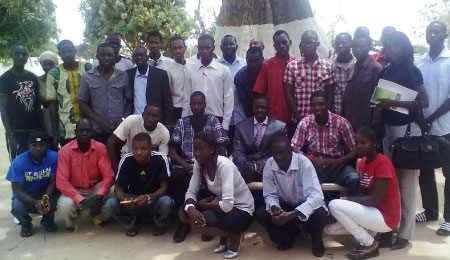 Beakanyang, a youth-led organization, on Saturday held the first National Youth Conference on Youth Participation in Politics and Decision-making Process in The Gambia.

The conference, held at the Tango Conference Hall in Kanifing on the theme: ‘Putting youth at the centre of decision-making’, was funded by the British High Commission in Banjul.

In officially declaring the conference open, the permanent secretary at the Ministry of Youth and Sports, Mambayick Njie, said young people have a very critical role to play in nation-building.

Times are changing in the world wherein young people are determining their own future nowadays, he said, while encouraging young people to seek knowledge and prepare themselves for responsibilities in the future.

PS Njie challenged all political parties in the country to incorporate youth polices and programmes into their manifestoes, nominate young people to contest for their parties and strengthen their youth wings to make them vibrant.

He also called on youth to not allow themselves to be disenfranchised during elections since it is their right to vote and be voted for.

Minister Jammeh, who made a surprised appearance at the conference, assured young people of his Ministry’s continued support and collaboration.

“Young people are very lucky; just look at the high table they are all young so the government will continue to empower the youth,” he said.

In his welcoming remarks, the president of Beakanyang, Tumani Danjo, said the idea of hosting the historic conference was conceived by his organisation and supported by the British High Commission and the Ministry of Youth and Sports.

“In line with our objective of promoting the participation of young people and women in political, cultural and economic development of the country, Beakanyang participated in the November 24th, 2011 Presidential Elections as Independent Domestic Observers. Prior to that, we have embarked on voter education in URR through our project known as “promoting human rights and democracy at the grassroots level’ sponsored by the US embassy,” he said.

According to him, youth have only been marginally involved in decision-making and therefore need to be fully engaged if the country’s development challenges are to be fully addressed.

Deputizing the Speaker of the National Assembly, nominated member Hon. Seedy Njie said it is amazing to see so many young, optimistic future leaders discussing their effective participation in the country’s democratisation process.

It is important that as young people they get involved in such positive dialogues and make their voices heard, he noted, saying that at the level of the National Assembly parliamentarians are very much committed to the plights of young people as this could be seen in the ratification of the Child Act, the African Youth Charter and other youth friendly legislations.

Other speakers on the occasion included the representative of the IEC Chairman, Sulayman Joof, who is the IEC Director of Administration, and Marchel Mendy, Executive Secretary of the National Youth Council, who all commended Beakanyang for the initiative.

The conference brought together young politicians, youth leaders, representatives of political parties and national youth organizations to promote and inspire young people to actively participate in the country’s democratization process.