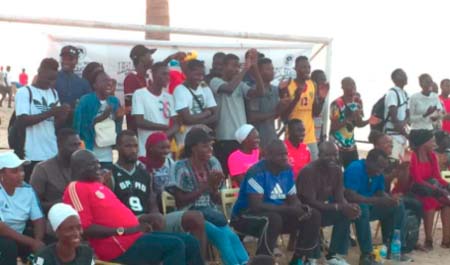 Grab your swimsuits and sunscreen folks because there’s going to be one exciting show on the Palma Rima beach on Sunday March 1st.   The 2019/2020 Gambia beach volleyball national championship final is set to take center stage as four teams prepare to face off at national scale.

Minnows YMCA are set to make history as Olympafrica is opting to create history in The Gambia. The final will affect how YMCA and Olympafrica see and conduct themselves on the national stage.

Olympafrica has assumed a leadership position in Gambian volleyball but YMCA are not certain about how it wants to lead against this rejuvenated Eastern boys side. With experience Olympafrica undoubtedly will influence that debate however both are on the brink of great joy, as none of them ever wins the competition.

Interior looks forward to create history as they appear to defend their title they won against arch rivals GAF last year. This is a virgin territory for Prisons, they have never appear in any sort of championship final and a victory on Sunday will give them the bragging rights to call themselves champions. The teams are fit, hungry and ready to perform in front of hundreds of viewers.