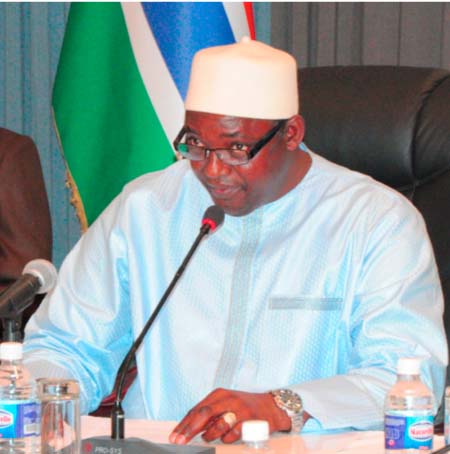 It is with great pride that I stand here today at the Institut des Science Politiques in Paris to give a lecture on this important theme: The Resolution of the Crisis and the Major Stages of the Reconstruction of The Gambia”.

Context on the crisis

To dilate on the theme, it is important to understand the context in which the crisis took place.  Since its birth as a republic, The Gambia has never witnessed a democratic transfer of power from one party or person to another until Coalition 2016 effected the change.

The former ruling party and its main opponent were banned from contesting.  It established a party which gave itself all the advantages of incumbency so that they could have an edge over all the newly created political parties to contest in the 1996 presidential election.

The country went through constitutional reform which gave rise to the 1997 Constitution. There was attempt to separate the executive from the legislature so that it could serve as a genuine oversight institution to prevent violation of the Constitution and abuse of office.

Many Gambians believed that they were entering a second republic that would guarantee them more liberty and prosperity.

The Jammeh administration used the powers to erode the democratic development of the country by putting other political parties to a disadvantage.

Under his two decades of rule Gambians had to live with ruthless dictatorship, bad governance, human rights abuses, bad policy choices, brutality towards its citizens and the denial of the rule of law.  The death penalty was executed thus leading to a state of fear and absolute tyranny.

Communities were threatened that if they fail to vote for the president in presidential elections they would not receive any support from government. The slogan was promoted that those who support the opposition do not support development. Development was linked to support of the ruling party.  Both democracy and development was lost.

Such conduct isolated the country from our friends and deprived us of development aid.

Our young people embarked on illegal migration, most of our intellectuals left for better jobs, businesses closed, media and political freedoms limited.

State institutions were politicized and state officials engaged in partisan politics, thus failed to serve the interest of citizens.  All these reflected on the macro economic situation of the country which had gone to its lowest point.

It became a crime to exercise our political rights if one supported opposition parties.  We were denied permit to hold rallies, citizens deprived of the right to demonstrate to show discord with the system.  The citizens became engulfed with fear.  The media was forced to censor itself.  Most people opted for the social media as an alternative means of expressing themselves, in particular the young people.

Human rights abuse such as unlawful arrests, detention without trial, torture, killings and disappearances of people seen as opponents of the APRC government were accepted as normal under the Jammeh regime.  The circumstances of political victims including the killing of political activist, Solo Sandeng who died after being arrested and tortured sparked the political crisis in The Gambia.  His only crime was engaging in a demonstration demanding electoral reforms.   The news of his death resulted to the main opposition party, United Democratic Party - UDP executive members to march out on the streets demanding for him dead or alive.  All the executive members who were out making such demand were arrested and jailed.

This created a political vacuum in the UDP.  On the 1st September 2016, the Party elected me as its flag bearer.

The population got annoyed but was conscious of the brutal nature of Jammeh’s leadership.  This made the population to feel helpless but determined to change their condition without bloodshed.  This situation coupled with the online campaign by Gambian Diaspora motivated the political parties to come together. Despite their different political ideologies, they became bound by their desire to free the Gambians from the bondage of the Yahya Jammeh rule.

On the 1st November 2016, we formed The Coalition 2016 consisting of eight stakeholders    (Seven Political parties and an Independent Presidential Aspirant).  I was elected a Presidential Candidate to contest for the 1st December 2016 election.

To be a candidate under the Jammeh regime was a big risk.  Presidential candidates had to pay half a million Dalasis, equivalent to ten thousand Euros. This was to make it almost impossible to have candidates to challenge the incumbent.  It was such a scenario that has prompted Gambians to take the courage to liberate themselves in a non-violent manner.

The Coalition 2016 team embarked on a campaign tour as a united front with peaceful but strong campaign messages. The electorates were enlightened that they had the power to change the government by exercising their civic right to vote in a secret ballot.  The Gambian Diaspora and friends of the Gambia got engaged intensively on Social Media as an alternative means of communication.

On the 1st December 2016, three candidates contested for the presidency.  Gambians went to the polls to bring about a change they so desired through the ballot box.  They decided to vote for me as President.  The Independent Electoral Commission declared me as the winner of the election.

My opponents, Mamma Kandeh of the GDC conceded defeat as soon as it was clear that he had lost.  Yahya Jammeh went on television and conceded defeat as well as congratulated me.  The population was pleasantly surprised that a dictator could concede without a fight.  The world celebrated the decision the Gambians have taken to bring about a peaceful change of government.

The political impasse started when to the surprise and disappointment of many, former President Jammeh went on television to refute the results of the elections.

He challenged the Independent Electoral Commission for providing wrong figures in my favour.  This created chaos in the country, tensions got high, conflict was looming and people were displaced both internally and externally.

Resolution of the Crisis

The official transition programme to ensure peaceful handing over of power was disrupted.  The disruption of the peaceful transition programme required tact to avoid bloodshed.    As President-Elect I received Gambians in their numbers to show solidarity and to defend their votes before my swearing in date of 19th January 2017.

It was the first time professional bodies, Civil Society groups, Community leaders, religious leaders, women and youths across the country openly showed support for the change of government.

At the international level, global leaders, diplomats in and outside the country reached out to openly congratulate me. Throughout the transition, I maintained a message of peace and promoted tolerance in my public statements as well as through the media.

Citizens were encouraged to respect the stated time I was to be sworn in as President as provided in the Constitution to promote the rule of law.   This was critical because many people were ignorant of the law and assumed that as President-Elect I should have assumed power immediately.

Furthermore it was the first time since 1965 when we attained independence that the Gambia had experienced handing over power from one democratic government to another.

The global goodwill during the transition ensured that there was peace.  The focus was on the legality that on the 19th January was the date when all organs of government had to recognize my presidency.  It was an important period when diplomacy was at its height.   Organization such as ECOWAS, AU, EU and the UN all came together to render support during the impasse.

There were high level negotiations led by sub regional heads of states from ECOWAS and behind the scene diplomacy involving various actors.   Military intervention was not ruled out because the former President insisted on staying in power after Gambians had decided.

After several consultations with ECOWAS I took the strategic decision to leave the country to enable ECOWAS intervention forces to engage in the country.

I chose to stay in Senegal because of its proximity and our shared cultural identity of the same people in two different states.   Public support was great and Gambians supported the ECOWAS military intervention to defend their will.  Gambians were reassured that their will was expressed when I was sworn in at the Gambian Embassy in Dakar on the 19th January 2017.  This was the day I legally became President of the Republic of the Gambia and on the 18th February 2017, my inauguration took place in The Gambia.

Major Stages of the Reconstruction of the Gambia

My government has the task to build a democracy that would give rise to the respect for fundamental rights and freedoms, rule of law and good governance.  It would require cooperation with development partners to enhance freedom and prosperity for our people.

The Gambia needs urgent financial and technical support to safeguard the change we have fought for to end dictatorship.  This will guarantee Institutional and legal reforms as well as promotion of human rights and freedom of our citizens can be sustained.

A Think Tank of experts has been set up to harness our human resource base.  Their expertise would be tapped in the various fields to support the government in its reform agenda.

Reconstruction of a country which has been destroyed can be challenging.  The reforms have already started with the promotion of human rights.   The political prisoners of conscience were all released and restructuring of the various institutions are underway. The laws are being reviewed; commissions are to be set up to review the public enterprises for the necessary reforms to take effect.  The reforms in the security sector are also ongoing.

My Government requires timely donor support to implement our National Emergency Response Plan.  The purpose of this plan is to engage our development partners either financially or technically in order to put our country on the right socio-economic and political path.  This will sustain our development agenda and promote growth.  In essence my vision is to guarantee the liberty of the people in a gender responsive environment.

We want to build strong institutions, have laws that will promote the dignity of the citizens.  We want to liberate our people to engage positively in nation building.

I would encourage my team to work with genuine investors who will partner with Gambians, transfer knowledge and build their capacity to sustain development.

In conclusion, I want to assure you that the Gambia is back and open to its friends and donor partners to attain the sustainable development goals.  It is when there is justice that there will be peace and there cannot be justice when the socio-economic and political climate is not favourable to the citizens.