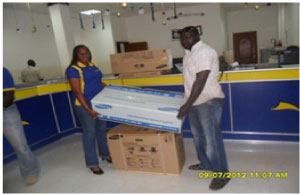 Bank PHB held their second raffle draw at its Kairaba Avenue Branch near American Embassy with sixty-four of their customers lined up for the draw. Out of the declared qualified customers three were crowned winners.

Shortly before the start of the draw, the chairman of the ceremony, Muhamed Jallow, told the waiting customers that any customer who deposited between D5,000 and D25,000 could go home with Samsung galaxy pocket phone.

He also said that any customer who also deposited between D25,000 and 100,000 will receive a home theatre entertainment system while any one who also has D100,000 to D500,000 in his account could get a Samsung air conditioner.

Isatou Jatta, Head of Foreign Operation department at Bank PHB Kairaba Avenue branch, thanked all those who were selected for the draw.

She said Bank PHB’s objective is to give something to all their customers which he said is somehow impossible. “This is why we came up with this idea of organizing weekly draw for our esteemed customers in order to strengthen our partnership and any of our customers who happen to win here will be glad,” she said.

At the end of he draw, Alieu Badara Jeng with ticket Number 0066 won a Samsung air conditioner marked 900,000 BTU.

A virtuous show of patriotism