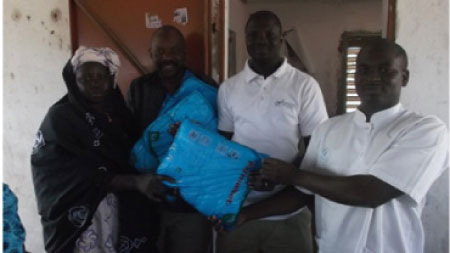 Speaking at the distribution point in Chilla village, Pa Modou Faal, AMMREN-Gambia coordinator, said the treated mosquito bed nets were meant for the vulnerable women and children under the age of five.

Faal stated that the distribution of the bed nets was done after consultation with health officials to identify villages to benefit from the package provided through AMMREN-Gambia chapter from the organisation’s secretariat in Ghana.

Highlighting the importance of sleeping under treated mosquito bed nets, Faal advised the beneficiaries to always make their environment clean, as this will also reduce the presence of malaria in their communities.

Noting that this is not the first time AMMREN-Gambia chapter is embarking on such an important activity, Faal said all is geared towards complementing the efforts of government in the area of health.

Gidom Bah, officer-in-charge of Kerr Cherno Health Centre thanked AMMREN for their support to the communities, noting that the donation will go a long way in addressing their needs.

Bah urged the women to always sleep under treated mosquito bed nets, and called on other organisations to emulate the good gesture of AMMREN-Gambia chapter.

Speaking on behalf of the women beneficiaries, Fatou Sillah lauded AMMREN for their support, stressing that the nets came at the right time, as we approach the rainy season.

She assured AMMREN-Gambia chapter that the donated nets will be put into good use, and urged other organizations to emulate the gesture.