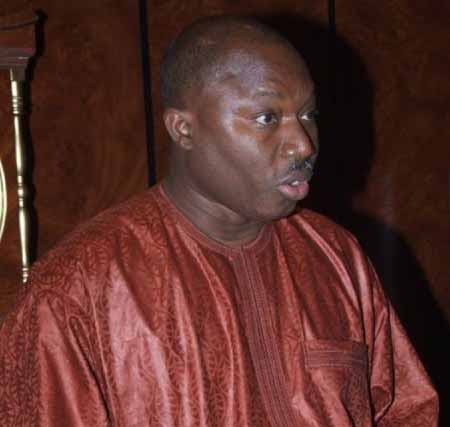 Officials of the American Chamber of Commerce in The Gambia on 25 November 2010 paid a courtesy call on the Minister of Economic Planning and Industrial Development, Hon. Mambury Njie, at his office  in Kotu.

The US-Gambia chamber officials undertook the visit as part of activities marking the Global Entrepreneurship Week.

Speaking at the meeting, Minister Njie congratulated the officials for coming up with the initiative of establishing the American Chamber of Commerce in The Gambia.

The government is always ready to support the private sector, he says, urging the officials to be in consultation with government authorities in whatever they are doing.

He also advised them to have a structure in place to enable them work amicably with the government towards the development of the country.

He also urged the chamber and its Gambian counterparts - the Gambia Chamber of Commerce and Industry (GCCI) - to complement each other's work rather than operate as competitors.

Also speaking at the meeting, Abdoulie Touray, president of the American Chamber of Commerce in The Gambia, said the chamber's aim is to promote trade and industry in the country and not to operate as competitors. With government support ,a lot could be achieved, he says.

Mr Touray also said the Gambians trading in the should serve as ambassadors of the country, noting that most of the good things that happen in are fuelled by their people in the diaspora.

In the same day, the chamber delegation also met with officials of the GCCI.