The criminal trial involving one Fatou Badjie failed to proceed recently at the Kanifing Magistrates’ Court before Magistrate Tabally.

When the case was called, CPL 3560 Colley announced that he was holding brief for Inspector Mballow.

The counsel for the accused told the court that he was not going to cross-examine the prosecution witness.

He reminded the court that the trial magistrate had earlier made ruling that the witness’ statement given at the police to be brought to court was to no avail.

He therefore applied for one more adjournment for the prosecution to provide the said statement or close their case and allow his client to open her defence.

Subsequently the trial magistrate granted the application and adjourned the case till 11 May 2011.

According to the charge on count one, Ndey Korka Ndong and Fatou Badjie on 5 October 2010, at

Fajara South Street
, jointly broke into the house of one Aji Ramou Tall with intent to commit felony therein to wit stealing.

Count two revealed that the accused persons on the same place and time jointly stole from the complainant’s bedroom a safe box containing cash of D505, 000 and two title deeds.

Readers could recall that the first accused, Ndey Korka Ndong, earlier pleaded guilty of both charges and was sentenced to two years in prison without any option of a fine. 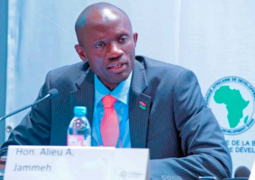