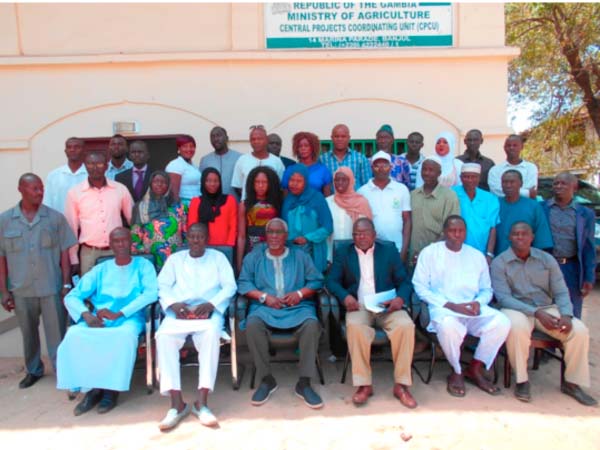 During the new Agriculture minister’s visits to institutions under his purview, staff under the departments of the Agriculture ministry said agriculture has been deteriorating over the past ten years, characterised by inadequate capacity, caused by job insecurity, a brain-drain, and the lack of a conducive environment, among others.

The visits started on Monday, and covered the Planning Service Unit, Central Project Coordinating Unit (CPCU) and the Food and Agricultural Sector Development Project (FASDEP), under the Department of Agriculture in Bakau.

This was followed by the second day’s visits on Wednesday, covering the Agricultural Mix Farming Centre in Wellingara, then the Department of Livestock Services and the Nema Project, both in Abuko, and a final meeting with the Livestock Dealers Cooperative Society.

During meetings held at the respective units, staff lamented challenges in getting the required facilities, ranging from low deteriorating capacities, and mobility constraints, among related office logistics that could help them become more effective in their work.

This was followed by a meeting at the Nema Project, and a final meeting with the Livestock Dealers Cooperative Society.

During the meeting with the livestock dealers, they explained the frustrations they went through under the former regime, and appeal for appropriate measures to remedy the situation.

Among problems they encounter was eviction, and a generally unstable working environment.

Agriculture minister Jallow, in his response, assured them of his support whenever needed, to enhance their development activities.

He advised them to strengthen their cooperation, so that they stand a chance to enable them collaborate with the government more effectively.

During the meeting, staff at the Agriculture Planning Services department complained of the lack of a good data system due to mobility and related challenges.

Hon. Jallow advised the administration to look into and ensure that the data system is in place, as a basis for resource mobilisation and fundraising activities.

They also appealed for training opportunities to enhance the competence of staff.

Francis Mendy, a member of staff, called for more staff commitment to their job.

Saite Drammeh, the permanent secretary, in his remarks said the down-sizing of the unit caused the challenges being faced currently.

He acknowledged that mobility is a challenge, but added that they are trying to embark on project activities to address such challenges.

The planning unit is what moves the Agriculture ministry, he said, adding that money is being given for data collection purposes.

“We can’t get funds without an appropriate data system. We were told that the tablets crashed. We have a lot of young people that need a job. If there is a budget, the positions will be filled.”

Hon. Jallow said the planning department is the most important unit under his ministry, describing it as the heart of his ministry.

He expressed the need to upgrade the unit.

He instructed his permanent secretary to start discussions at the ministry level, as his task is to work with Gambian farmers.

His obligation is to see how best to improve the condition of the long suffering Gambian farmers, the minister said, and expressed the need for fair play and respect for the channels of communication.

He assured all that his doors are open, and called for equal treatment of Gambians, adding that he stands for the change that Gambians voted for.

“We can’t operate in a dilapidated condition. We also need to have a second plan as backup,” he said.

He described his unit as the nerve centre for all donor-funded projects under the Agriculture department, adding that among the issues addressed by the CPCU is the duplication of efforts.

Commenting on the activities that the unit is embarking on, he said the plan launched in The Gambia is linked to the Ecowas agricultural policies and continental agricultural development plans.

The current projects they are running include 21 vegetable gardens in North Bank Region and Upper River Region respectively.

He added that the unit also hosts the Soil and Water Management Project, and the Agricultural Valued Chain Development Project.

He also explained that a draft Agricultural policy is in place, and that with the advent of  the new government there is need to rush to finalise the policy.