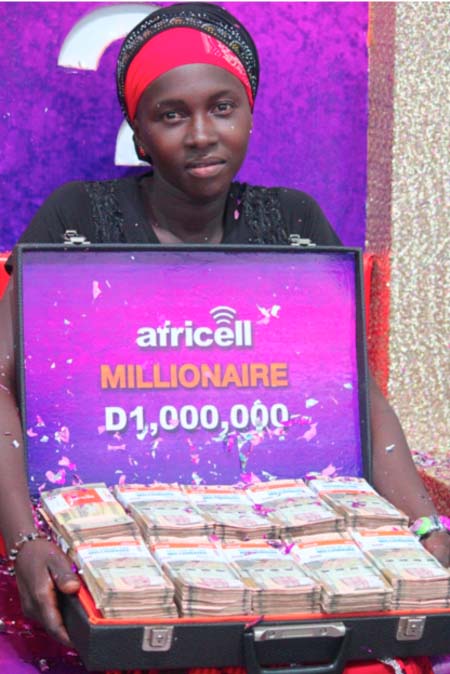 Africell, The Gambia’s biggest GSM operator, Monday made one Saffiatou Ceesay, a 22-year-old woman, a millionaire.

The draw was held live on GRTS TV, and saw the young lady emerge winner out of 19 finalists.

It was witnessed by Oustas Abdoulie Drammeh and GRTS Director General Momodou Sabally, among others.

Speaking shortly before the draw, Oustas Drammeh thanked Africell for what he described as their “brilliant work” for the nation.

He said all of the Almighty Allah’s creation was made in sevens and twos, and as such “it is important for everyone to grab the seven and two lines.”

Allah made the sky and sand, each in seven layers, and when praying “we also use seven parts of our body” which are the two feet, two knees, two hands and forehead.

Allah also created men and women, who are a pair, Oustas Drammeh added, and urged people to buy the seven and two lines as they come with a lot of benefits.

He congratulated the winner, and prayed for Allah to bless the money she had won.

Momodou Sabally, GRTS Director General, said he was pleased with the gathering at his institution.

He also expressed delight about their partnership with Africell, which he said has been in existence for a long time.

Sabally urged the winner to invest the money wisely, in something that will have positive impact in her life forever, and not to waste it.

Saffiatou Ceesay, winner of the one million dalasis, said she has been calling and sending messages to 1010 since the promotion started.

The 2012 Nusrat Senior Secondary School graduate added that she would give the money to her mother for her to decide what to do with it.

She urged everyone to get the seven or two line, as “Africell is always there for the people”.

She revealed that the line belongs to her mother, who has been using it for years before giving it to her.

Roland Senghore, a supervisor at Africell, said they were happy that they have had a winner from Lower River Region, noting that only God knows how the money will impact and change the life of the young girl.

“At Africell no one is a loser and there have been 300 winners” across the country, since the commencement of the promotion, he added.

Senghore prayed for the winner and her family to utilize the money beneficially. He also applauded the people for patronizing Africell.

There is more in the pipeline for Africell subscribers, he announced, adding: “Where Africell goes no one dears to follow!”

It would be recalled that Africell sponsored the live broadcast of Euro 2016 matches on GRTS, and on each day gave 10 lucky winners each D10,000, from the beginning of the tournament up to the end. 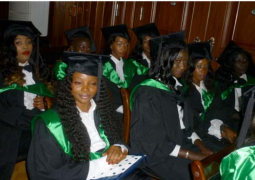