Africell Gambia Limited yesterday launched (Thuraya) products in the country at a ceremony held at the Coco Ocean Resorts & Spa in Kerr Serign.

Thuraya is a satellite phone company headquartered in the United Arab Emirates (UAE).

Officials say the partnership is motivated solely by Africell’s passion and dedication to not only provide the GSM Services, but also to push the country forward in terms of achieving world class communications standard in all aspects.

Speaking at the launch, Badara Mbye, Africell’s CEO, said The Gambia was the latest place the Thuraya products have been launched among countries Africell operates.

According to Mr Mbye, each of the two companies, Africell and Thuraya, started operations ten years ago, since then they have been able to achieve success in this short space of time.

Thuraya is a world class company that provides satellite communications within and outside the territorial boundaries of Asia and other parts of the world, the Africell boss said.

Today Africell can boast of 94% of nationwide coverage in The Gambia and over 400 roaming partners worldwide, which he said is a remarkable achievement in any international benchmark. The partnership he said is one of the many initiatives they have embacked upon.

In Africell they strive for excellence, Mr Mbye said, adding that they were selected first in five years as the GCCI’s telecommunications company of the year.

In Africell what they do is to build a great striving model, he added, saying Africell as a telecommunications company will continue to enhance its capability to shape the market to the delight of their subscribes and the country in general.

The Africell CEO used the opportunity to thank President Yahya Jammeh for creating an enabling environment for business to strive.

For his part, the Thuraya area manager, Roen Evan Menezes, said the partnership is a great achievement for Africell, which shows the company’s wiliness in go beyond boundaries in rendering communications service.

With the efforts of combining GSM and satellite, the initiative would give Africell the opportunity to have 100 percent network coverage in the country.

“Providing mobile satellite communications to over 140 countries around the world, Thuraya offers a congestion-free network that now covers most of the planet, encompassing Asia, Africa, Australia, the Middle East and Europe,” Mr Menezes said. 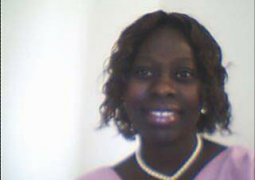