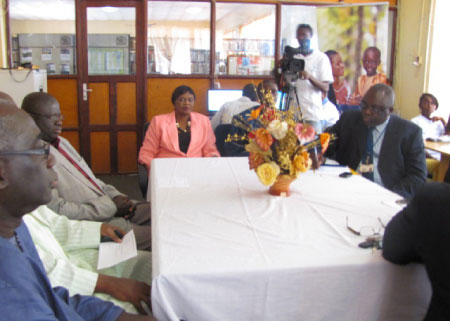 The leading commercial bank in The Gambia has continued its tradition of giving back to the society in which it operates by recently equipping the national library with ten new Dell desktop computers with full internet connection for research and study purposes.

Furthermore the bank also refurbished the equipped section of the library with floor carpet and curtains to make it more comfortable for use by students and the general public.

In an handing-over ceremony of the equipped section of the library to its authorities on 9 May 2012, the General Manager of Trust Bank said that making such interventions in the education and other sectors of the nation is nothing new to Trust Bank.

Oreme Joiner says his bank’s coming to the aid of the Gambia National Library Service Authority (GNLSA) is part of their traditional involvement and assistance to other educational projects, which complements their Corporate Social Responsibility efforts.

While referring to the well refurbished library study area, Mr Joiner said: “After due consultation with the Director General [of the GNLSA}, we have refurbished the area by providing ten  new Dell desktop computers with full internet connection for use by students and the general public for study purposes. The bank has also provided floor carpets and curtains for the entire study area among others.”

In his remarks on the occasion, GNLSA Director General Pa Abdou Wally Mbye thanked and commended Trust Bank for the support, saying the bank has made an invaluable contribution to the transformation process of the national library to its goal of catching up with the 21st century technology and providing a state-of-the-art computers for the national source of knowledge, information, facts and records.

He said that over the years the GNLSA board and management have worked hard to taking the library from a creeping to an effectively walking stage, with more room for improvement. He also said they have been working very hard to computerize the services they are rendering, and ensure an up-to-date and computerized record and research work.

“We will not rest on our laurels,” Mr Mbye said, while commending Trust Bank for joining other institutions that have rendered a helping hand to the library over the years, such as UNESCO and QCell.

The GNLA chairperson, Beatrice Prom, in her remarks, said Trust Bank’s intervention by uplifting the standard of the library study area, now named after the bank as ‘TRUST BANK STUDY’, would help both the students and the general public in doing better research work through the internet.

She applauded the CSR efforts of Trust Bank, whom she said has been doing a lot towards education and other sectors of national development.

Ms Prom, a senior official of the Gambia Chamber of Commerce and Industry, called on members of the private sector to emulate Trust Bank in supporting the GNLSA and other educational sectors.

The national library, she said, is rich in books, records, statistics and facts, which are also digitalized for safety and posterity, a collection they call ‘Gambiana’.

“The Library has been moving from book-based to ICT and digital-based material,” she said, calling on students to effectively read books as well as use the internet and library computerized information to gain up-to-date knowledge of their field of studies and the world.

“The future is knowledge-based economy,” she said, adding: “Read books but also go to the computer and read e-books.”

PS Baboucar Bouy: vice chairperson of the GNLSA, commended Trust Bank for its noble deeds in sharing its profits with the people through its corporate social responsibility drive.

Mr Bouy, who was given a standing ovation for making Gambia proud through a World Bank award recently given to him for his exemplary work and performance in the field of education, said: “Trust Bank is a very important partner to the education sector.”

The education permanent secretary pointed out that the provision of the equipment, which is about D400,000, has already eaten into the over D100 million profit made by Trust Bank in 2011.

Trust Bank will continue to maintain a fruitful relationship with the Gambia national library, as it has been doing with all other partners and institutions it has been extending a helping hand to, said Dodou Niang, marketing manager of Trust Bank Gambia Limited.

All the speakers and the library board members call on the public, especially students, to go to the library to study and conduct research, for it is rich in reading material.