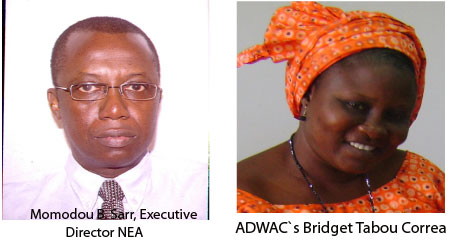 The National Environment Agency (NEA) and a local NGO operating in the North Bank Region known as ADWAC recently signed a Memorandum of Understanding at the agency’s Kanifing head office for a collaborative venture aimed at boosting environmental sustainability.

The signing of the MoU seeks to synchronise and synergise the roles and responsibilities of both parties in the implementation of their outlined environmental activities.

The signing ceremony was presided over by the Executive Director of the NEA, Momodou B. Sarr, and Bridget Tabou Correa, Head of Programmes at ADWAC, who deputised her director, Mamsamba Joof.

In her statement, Madam Bridget Correa disclosed that her NGO recognises the fact that as a stakeholder whose responsibility is to supplement government effort in meeting the development needs of the country is well aware that it cannot achieve the noble task it sets for itself without close collaboration with relevant government departments, notably the NEA being the government’s focal point on the environment.

ADWAC, she said, also recognises the fact that these government agencies have the sole responsibility as it relates to their institutional mandates.

In recognition of this fact and to enhance close collaboration and support between the ADWAC and the NEA, she pointed out that the MoU on the table to be signed has been developed as a framework for closer working relationship between the two institutions.

“By this Memorandum of Understanding, ADWAC recognizes the NEA as the lead agency in environmental matters in The Gambia and accepts the agency’s role as the custodian of Gambia Government’s environmental action plan and implementer of the National Environment Management Act 1994 of The Gambia and that all other agencies, organizations and institutions working in the complex arena of environment are obliged to collaborate with the NEA,” she said.

In his remarks, the executive director of the NEA, Momodou B. Sarr, disclosed that his agency would support natural resources management programmes of ADWAC including promotion of community forest concepts, agro forestry techniques, seedling propagations, anti-bush fire campaigns, etc and would participate in the training and sensitisation of farmers on the national environment policy and acts.

He said that the NEA would not hesitate to provide technical support in the implementation of environmental programmes in areas where ADWAC plans to carry out re-forestation or other natural resources management activities that will have positive impact on the vegetation cover, and periodically visit the NGO`s projects sites to provide technical advice and support in project implementation when requested, Sarr pointed out.

He acknowledged that his staff would help conduct Environmental Impact Assessment (EIA) and other related studies when requested by ADWAC on a timely basis.

Sarr said the NEA would have joint planning sessions with ADWAC as the need arises and when requested and will also collaborate to monitor the performance and impact of its environmental intervention programmes and activities. 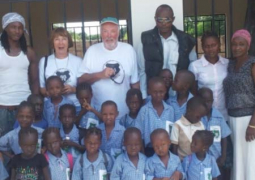