Here we reproduce the full text of the release:
"The Special Rapporteur on Freedom of Expression and Access to Information in Africa, Commissioner Pansy Tiakula, is gravely concerned about reports she has received of the ongoing trial of seven journalists in The Gambia, which amongst other issues, formed the subject matter of her 22 June 2009, letter of appeal to the President of The Gambia, and in respect of which she awaits a response.

According to reports, all seven journalists face a six-count charge of interalia: conspiracy to and publishing seditious publication, "with intent to bring into hatred or contempt or to excite disaffection against the person of the President or the government of the Republic of The Gambia" and conspiracy to commit and criminal defamation, "with intent to bring the President of the Republic of The Gambia and the government of The Gambia into contempt and ridicule".

The Special Rapporteur has been informed that following their arrest, the journalists were detained incommunicado and beyond the constitutionally permissible period of 48 hours, before being charged before a

The Special Rapporteur received reports that at the High Court on 3 July 2007, all seven journalists were rearrested, and that while bail was granted a few hours later to Ms Jabbi Dibba, the sixth journalist, other journalists were only granted bail on 6 July 2009.

In another letter of appeal to the President of The Gambia, dated 20 July 2009, the Special Rapporteur expressed her concern, that if indeed these reports are accurate, the government of the Republic of The Gambia will be failing in its obligations to protect the right to Freedom of Expression as expressed in Article 9 of the African Charter on Human and Peoples' Rights (the African Charter) and other international human rights instruments, to which the Republic of the Gambia is a state party.

The Special Rapporteur also expressed her concern that despite the fact that the charges against the seven journalists reveal no issues of national security, the High Court on Friday 10 July 2009, granted the prosecution's request to conduct the trial in camera in order to protect the identity of the state security personnel, called as witnesses.

The Speial Rapporteur is therefore gravely concerned, that such a state of affairs would be a contravention of the provisions of Article 7 of the African Charter which guarantees the right of every individual to a fair trial, and the requirement under the Principles and Guidelines on the Right to a Fair Trial and Legal Assistance in Africa (Principles and Guidelines), which supplements and reinforces the fair trial provisions of the African Charter. Principle I (f) (2) of the Principles and Guidelines provides that: "The public and the media may not be excluded from hearings before judicial bodies except if it is determined to be for reasons of public order or national security in an open and democratic society that respects human rights and the rule of law."

Whilst requesting the comments of the government of the Republic of The Gambia on all the reports contained in her letter, the Special Rapporteur drew the attention of the Gambian Government to Principle II of the Declaration of Principles on Freedom of Expression in Africa (the Declaration) which reinforces and further elaborates the provisions of Article 9 of the African Charter, which provides that "No one shall be subject to arbitrary interference with his or her freedom of expression" and that "any restrictions on freedom of expression shall be provided by law, serve a legitimate interest and be necessary in a democratic society'.

She also urged the government of the Republic of The Gambia, to take steps to fulfil its obligations under Article I of the African Charter in respect of the rights to Freedom of Expression, by amending all existing media laws, in conformity with Principle XII of the Declaration which, interalia provides that: "No one shall be found liable for true statements, opinions or statements regarding public figures which it was reasonable to make in the circumstances" and that public figures shall be required to tolerate a greater degree of criticism

The Special Rapporteur in her letter reiterated her anticipated receipt of an official invitation from the government to conduct a promotional mission in The Gambia in August 2009, as was requested by her office in April 2009. She also restated her sincere commitment to utilise this intended mission to engage in constructive dialogue with the government of the of on the promotion and protection of human rights in general and the situation of Freedom of Expression, in the , in particular".

In the Gambian constitution the minimum hours of detention before trial is 72 hours. 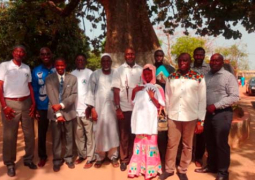