At the sidelines of the 51st ordinary session of the African Commission on Human and Peoples’ Rights which opened at the Kairaba Beach Hotel Wednesday, human rights activists have warned of a full-scale war between North and South Sudan, unless the international community acts with urgency.

The special session, called by human rights activists from the Darfur Relief and Documentation Centre, African Centre for Justice and Peace Studies, International Federation for Human Rights and the International Refugee Rights Initiative, centered on the topic: “the human rights situation in Sudan and the submission of Sudan’s 4th and 5th periodic reports to the African Commission”.

Addressing the session, Osman Hummaida, a panelist from the African Centre for Justice and Peace Studies accused China of complicity in Sudans’ war, saying that China is indirectly fuelling the war in Sudan.

“We have evidence that Chinese-made weapons are used in the conflict. Where are these weapons coming from? Most of the time, they come through Libya, Eritrea or Uganda. The Chinese are partly responsible for the destruction of Sudan,” Osam a Sudanese told the session.

He accused the Sudanese authorities of systematic use of rape as a weapon of war, and called on the international community, particularly the African Commission, the UN and its allies to intervene in the conflict, warning that failure to do so will see the two Sudans go into full-scale war.

According to him, when Sudan submitted its last periodic report, the African Commission expressed concern that Sudan has struggled with many political, social and ethnic challenges that are characterized by human rights violations.

Severe violations of human rights by state actors are a daily reality in Sudan and the independent South Sudan, he added.

Hassan Shire, executive director of the East and Horn of Africa Human Rights Defenders project highlighted the conditions that human rights defenders face in the execution of their mandate and duties.

According to him, charges brought against Sudanese President Omar Al-Bashir by the International Criminal Court brought a fierce crackdown on human rights defenders in Sudan.

“Conflict in the contested border regions between South Sudan and north Sudan has brought the two countries to the brink of war,” he said.

Abdelbagi Jibril, representative of the Darur Relief and Documentation Centre described the human rights situation in Darfur as terrible.

“There is a terrible situation on the ground in Sudan; people are dying on a daily basis because of the conflict, which has started more than four decade ago,” Jibril said, adding that many people around the world expected that the splitting of South Sudan from Sudan would bring peace to the region, but this has not been the case, as fighting intensifies. 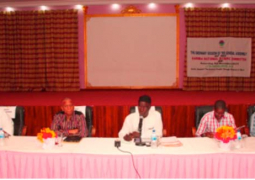