The bills were presented by the Minister of Youth and Sports, Alieu K. Jammeh.

Presenting the bills before deputies, Minister Jammeh said the PIA bill when enacted would establish a fully-fledged, legally constituted institution that creates an environment where young people are mentored through the award programme to acquire hands-on relevant skills, culturally and environmentally endowed with the required attitudes and knowledge to engage in national development.

He said the President’s International Award, which was formerly known as President’s Award Scheme, has continued to exist in The Gambia since 1979.

“It is a member of an International Award Association that is made up of 63 National Award Authorities and 350 Independent Award Centers in more than 140 countries and territories across the world,” he told deputies.

The minister added that the scheme is a youth development programme and serving as one of the satellite institutions of the Ministry of Youth and Sports, it seeks to provide young people with a sense of responsibility, and instill in them developmental skills that are beneficial to the nation.

It was a balanced progressive programme of extra-curricular activities for young people aged 14-25 years, which encourages personal discovery, growth, self-reliance, perseverance, responsibility and service to the community, he went on.

He added that it is voluntary and young people must choose to do it in their own free time, as it requires personal commitment and dedication at all times.

“It has no maximum time limit for an award, provided all activities are completed by the time participants are in their 25th birthday. It is also open to adult volunteers who want to complete an award at any time of their life as adult helpers,” he further stated.

He disclosed that currently, about 7,815 young people are on the award programme through its three categories of Bronze, Silver and Gold in 48 schools in the country with two community initiatives in Dimbaya and Sifoe.

There are indeed plans to expand it to all parts of the country, he continued.

He further informed deputies that the scheme had another component which focuses on skills enterprise development, thus providing marketable skills to young people as a means to reduce their vulnerability and improve their employability options.

Minister Jammeh also said that trade areas under the TVET curriculum are being delivered at the Skills and Enterprise Development Centre of the Scheme with an enrolment level of 300 young people at the Bakau Centre and 10 in the Kerewan Centre.

Hon. Seedy Njie, nominated member, who seconded the bills, said that most of them had gone through the scheme and the tabling of such bills before deputies was a good move.

He said the objective of such bills is to increase the talents of the country’s youths, and that this would complement the efforts of the government in training the youths in different skills. 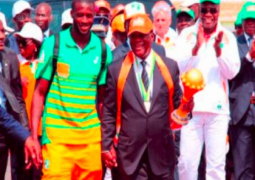