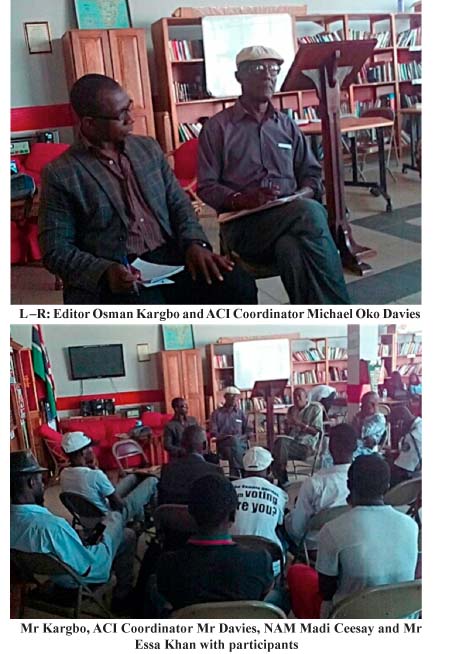 Anti-Corruption International, The Gambia, on Tuesday held a panel discussion on corruption and corrupt practices and how to make The Gambia less vulnerable to corruption.

The seminar, conducted by an anti-corruption expert, Michael Oko Davies, under the theme ‘’The Risk of Corruption and Corrupt Practices in The Gambia and its impact on National Development’’, was held at the American Corner on Kairaba Avenue.

ACI is a chapter of the international organization based in Benin aimed at combating corruption in Africa.

‘’There are three forms of corruption: Political Corruption/Grand corruption, bureaucratic/petty corruption and systematic corruption,” Mr Davies said, adding that for a person to be termed as corrupt, one must have abused either his/her grand or petty power.

He noted that civil society organizations contribute immensely about ninety percent to the fight against corruption.

Mr Davies noted that the public forum is the first of many to come as they have plans to organize more seminars in the future.

Speaking on the panel discussion, former civil servant and activist, Essa Khan, said corruption must be minimised to a level it should not hinder the development of the country.

He pointed out that issues like weak governance to enforce certain legislative acts coupled with lack of healthy democracy that promotes freedom of speech and expression, make it difficult to fight corruption in Africa.

‘’Corruption is closely tied to governance and development,’’ he said.

Mr Khan encouraged youths in the country to join hands in the fight against corruption for the betterment of all and sundry.

For his part, Madi Ceesay, National Assembly Member for Serrekunda West, and a member of the National Assembly Panel on Anti-corruption, said such discussions and forums on corruption and corrupt practices must be encouraged for national development to take place in The Gambia as it paves the way for the enforcement of laws that enable the nation to combat corruption.

Mr Ceesay noted that laws that protect whistle-blowers must be enacted to help in the fight to expose corruption and corrupt practices for the benefit of all.

For his part, Osman Kargbo, editor at The Point Newspaper, who also moderated the seminar, emphasised the importance of the seminar, saying it will enable the masses of the Gambian people to learn about the different types of corruption and their impacts as well as the way forward to combat corruption in all its forms.

Police Superintendent Sulayman Darboe, one of the participants at the seminar, pointed out that members of the judiciary, together with the police, are key players in the fight against corruption in The Gambia. He also said corruption is in every sector of governance and society hence it must be fought by all and sundry.

The African Union (AU) in July, 2017 held the inaugural occasion of African Anti-Corruption Day in Addis Ababa, Ethiopia, dedicated to giving prominence to the anti-corruption fight on the continent.

The Assembly of the African Union also declared 2018 as ‘’The African Anti-Corruption Year’’.

The Chairperson of the African Union Commission (AUC), H.E. Moussa Faki Mahamat noted that the African Continent’s fight against corruption marks an important step towards making Africa the place for all to desire.

The Gambia is a signatory to the African Union Convention on Preventing and Combating Corruption (AUCPCC) adopted by the 2nd Ordinary Session of the Assembly of the Union on 11 July 2003 in Maputo, Mozambique, to which all state Parties to this Convention are expected to demonstrate their national legislative and policy instruments aimed at combating corruption.

This premier anti-corruption seminar organised by Anti-Corruption International, The Gambia, is in the right direction towards ensuring and sustaining the level of commitment of combating corruption in The Gambia.