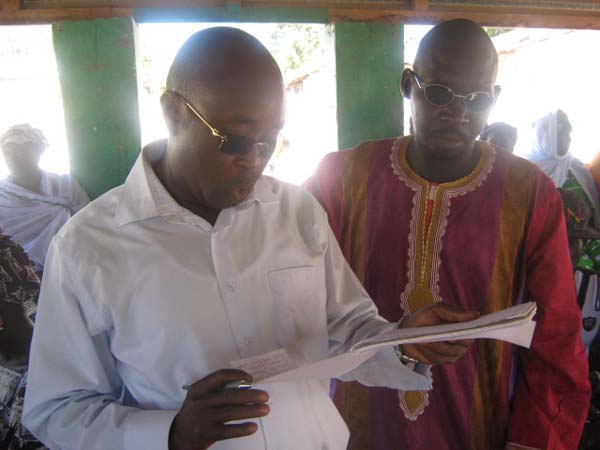 This reporter recently went on trek with officials of Abundance Fund a non-governmental organisation based in San Francisco, Califonia USA now actively engaged in rural development work in The Gambia. We highlight below a statement from Abundance Fund Board Member, Mr Musa Bassadi Jawara, including an interview with him.

"It's with profound happiness and accomplishments that I state categorically, and unequivocally, that all the projects the Abundance Fund (AF) is sponsoring in The Gambia have been a scintillating success in the initial trance of funding.  We have achieved our objectives on all cylinders, conceptually and realistically addressing the plight of the rural communities we sought to assist in this initial phase of our intervention. Our efforts will continue to sustain the progress already achieved with a view to expansion. It's with this sobering realisation that I move from here to report to the Board of Directors in San Francisco, California. Please visit our web site at: www.abundancefund.org

"The initial funding by AF provided 50 beekeeping boxes to these communities and a total of 250 boxes are earmarked for the project at maturity. Let's now delve into statistical facts: Each beekeeping box at harvest time produces 50 litres of honey and the market price per litre is one hundred and fifty dalasi (D150 ~ $5.8 U.S.), and total revenue generated by one box in a harvest is estimated at seven thousand five hundred dalasi (D7,500 ~ $288.5 U.S.). Gross revenue for the 50 boxes in a harvest amounts to three hundred and seventy five thousand dalasi (D375,000 ~ $14,423.1 U.S.).  When we factor in the revenue generated for the 6 harvest periods annually amounts to two million two hundred and fifty thousand dalasi (D2,250,000 ~ $86,538.5 U.S.).

"When the project reaches maturity, the estimated annual gross revenue from 250 boxes equals eleven million two hundred and fifty thousand dalasi, (D11,250,000 ~ $432,692.3 U.S.). Talking about empowering the poor by any standard of measure, this is EMPOWERMENT spelt in broad strokes! Our strategy and approach are guided by a regime of sound financial management and accountability from project beneficiaries in achieving AF's stated goal of empowering the poor to realise their full potential.  With the progress recorded so far, we're on our way to meeting this goal."

"This project has been in commission for 20 years, about a kilometre stretched with horticultural crops. I was amazed with what I saw, during the visit, of how hard the 500-women membership is feverishly and spasmodically ploughing the earth to feed the rest of society, with paltry cash returns for their efforts. Statistically, an average of twenty thousand dalasi is earned per project member annually from crop produce, and that amounts to gross earnings of ten million dalasi (D10,000,000 ~ $384,615.4 U.S.), by all members combined. AF has financed the installation of 15 new wells, renovation of dilapidated wells, and the purchase of three piles of rapid organic compost to help revitalise depleted soil.   Water supply is one major caveat with this project and, given the preponderant women-membership, the long term objective and solution is to construct a modern borehole, to ease water needs of the entire project area."

"The Christian Children Fund (CCF) (now called Child Fund The Gambia) and the American Embassy, Banjul, have done a yeoman?s job in supporting this project since inception. The CCF built classrooms for the nursery school and helped pay teachers there. I was informed at the meeting, during the visit, that CCF has cut its support for the nursery school, and now the community is desperately banking on AF support. The American Embassy support was in the form of wired fencing of the irrigation gardening project area. AF initial funding provided training for thirty project members on food processing and preservation. The training was conducted by the National Nutrition Agency. The next AF support will be directed at the irrigation project for the commencement of crop cultivation.  Proceeds derived here go to support the nursery school, the ultimate objective of the project."

The Point: Mr. Jawara, how would you describe the overall status of Abundance Fund sponsored projects in The Gambia?

Mr. Jawara: In any new initiative, I don't care whatever it is, laying a solid foundation is central to achieving the desired objective in the end. We have made a quantum leap from the outset by setting in motion a very robust program aimed at addressing the core objective of our organization, that is, to help the poor to realize their full potential by providing them with the necessary tools to achieving it.  All in all, I'm encouraged and satisfied with where we are in this process.

The Point: What do you mean by this process?

Mr. Jawara: Development is a process, and the Herculean task embarked upon in these projects is multi-layer objective driven and must be executed in tandem before reaching maturity.  We're in it for the long-term.

The Point:  Any plans to add new projects on the existing ones?

Mr. Jawara: Yes. The board has voted unanimously to stay in The Gambia and Namibia and not to expand to other countries. With this decision, the existing projects will be strengthened and proposals for new projects invited. Stay tuned.

The Point: In the past, the interviews we had with you, you've been very critical of development agencies like the World Bank and others. What are you doing differently at AF?

Mr. Jawara: The genie is out of the bottle, and the answer lies in my assessment of the ongoing activities contained in my statement. With time, a stark contrast will be drawn and AF's mantra, if you will "of empowering the poor to realise their full potential will be the vogue in development circles. AF's executive director, Dr. Kevin Warr, Professor Joe Stigler's, former chief economist of the World Bank, and many notable scholars, all ended their stint with the Bank after becoming disillusioned with how the issue of poverty was being sentimentalised globally for political gains. The stark truth is, there is no issue, poverty that is, at least in my view, that has been marred by duplicity, demagogy and sanctimonious arrogance than this one.  Even Prime Minister Gordon Brown of Great Britain, opined recently in a sense, that the tools the World Bank is employing to end poverty in the developing world are antiquated and the organization needs redirection to meet the challenges posed by the current global recession. And, I can go on and on with the tirade "You can tell my friend, if anything, I loathe the way business is done at the World Bank and its parallel organizations. It's the gospel truth that when the Breton Woods institutions were commissioned after World War II, it was the plight of the poor in the developing world that they were charged to address. And it's a sad commentary that after more than six decades, billions of dollars spent, the poor still languish in unfathomable hardship caused by bureaucratic malfeasance.  It's time to try something new! I vividly remembered in the 1980s, the buzzword in development circles was structural adjustment with the hullabaloo that accompanied it! The carnage in terms of the human toll, and the plethora of endemic poverty it left in its trail, is until now unconscionable."

It's my fervent belief and conviction that Africa, in particular, should and must consider an integrated economic approach, if we should ever bring to a halt, this cycle of dependency and abject poverty of her people.  The resources of AF are miniscule in the realm of the continental development agenda.

The Point: Thank you, once again, Mr. Jawara.

Mr. Jawara: You are most welcome.