The Gambia Nurses and Midwives Association (GNMA) recently elected a ten-man executive committee to run the affairs of the association for the next two years.

In an interview with Health Matters at the Royal Victoria Teaching Hospital yesterday, the President of the association Momodou Musa Baro said the association has been around for many years, though not functioning as a professional body. As he put, all State Registered Nurses and State Enrolment Nurses all have their own association, outlining that they are all under the Nurses and Midwives Association.

He stated that the main objective of the new executive is to build up on the work of the previous executive, and to also embark on a series of fund-raising programmes.

Noting that they have so many projects in the offing, he said in order to achieve their dreams they must raise funds, both nationally and internationally. This, he noted, can be realized through the monthly registration fees of nurses and their subscriptions.

"We will also engage both the public and private sector in the fund-raising drive," he stated.

He also revealed plans that the association will embark on a series of social activities countrywide by engaging local musicians.

He said at the international level the association will be contacting Gambian nurses abroad and in each country there would be a focal person, who would help in raising funds in their respective countries of residence, adding that individuals and organisations would also be approached for assistance.

Mr. Baro stated that the association will make sure that the voice of the nurses are heard, noting that nursing is a profession that entails selflessness as enumeration is incomparable with other professions. "Therefore, it requires a lot of dedication and sacrifice," he added.

He also stated that the association will also continue to educate its members not only in raising their standards but also to maintain high quality standards.

For his part, the Vice-President of the association Juma Jallow, said "if quality is to be achieved in the health delivery system, nurses have to take an active role in the care of patients, at all levels of service delivery."

Despite the fact that the former executive was dormant, Mr. Jallow said through good leadership qualities of Mrs. Ramou Cole Ceesay, they were able to secure a plot of land for the association, adding that the new executive will do its best to revitalise the organisation.

"This is an opportunity for nurses to really showcase their knowledge and skills, thus improving their image to the society they serve," he noted. 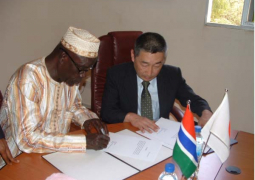