Ukanwa Ikechukwa, the first accused person in the ongoing abduction case at the Bundung Magistrates' Court, recently told the court that he found the man they are alleged to have abducted making love to his wife.

He told the court that at one time he was residing in Sukuta and it was rumoured that there was a white man who usually comes to his wife in his absence, this he stated he was not comfortable and as result, he relocated to Brusubi.

He adduced that one Sunday upon returning from Church service, one boy called Jimmy informed him that a white man came to his house and slept with his wife.

He further adduced that on , he went to work, but on that fateful day, returned earlier as they were short of materials. He said on his way going home, the same Jimmy informed him that the white man was in his house, hence he went for Benjamen George and went with him to his house and found the man on top of his wife.

"I met this white man on top of my wife and I started beating my wife, and the white man started to appeal to me and told me if I could forget this thing he will give me any amount I request,"he added.

He added that he asked the white man about his origin, and he told him that he was from . He adduced that the man promised to give him D300, 000 because according to him he doesn't want to be exposed in The Gambia. He told the court that he accepted D100, 000 from the man. He said he was later arrested and taken to the Kotu Police Station were he found his wife.

It could be recalled that Ukanwa Ikechukwa, Benjamen George and Fatou Sarr are standing trial for alleged offences of conspiracy to commit a felony and abduction with intent to confine a person. 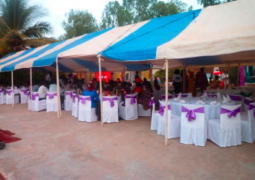