In Africa, the likes of Charles Taylor, Foday Sankoh, Idi Amin and now Laurent Gbagbo have all got their just desserts. Whatever good they might have done has been subsumed by the enormity of their despicable acts.

At the other end of the spectrum are men like Nkrumah, Mandela, Patrice Lumumba who will always be remembered for making Africans proud, because of their heroism and internationally-acclaimed good work.

Of course, they were not perfect men, but their positive contributions to humanity far outweighed whatever shortcomings they might have had. As a result, it is the good they did that now lives after them.

Other men in power have also reaped the benefits of their adherence to the public morality of our times - good governance and democracy.

Former President Thabo Mbeki of South Africa became an international figure when he peacefully handed over power, after his people asked him to do so.

Since then, his stock as an elder statesman has been on the ascendancy. So many people including Africans have lived up to expectations in their positions of power and, as a result, they have enjoyed similar privileges.

It is against this background that we rejoice with Fatou Bensouda on her appointment as the new chief prosecutor of the International Criminal Court.

This is a massive achievement, not only for Fatou Bensouda but also for The Gambia, for every Gambian, Africans in general, and the rest of the world.

It is recognition of the commitment of an African woman to justice for all human beings.

If Fatou Bensouda had not comported herself, nobody would have considered her for this most honourable assignment. It takes a genuine person to work for access to justice for all.

So the Assembly of State Parties must have seen in Fatou Bensouda impeccable integrity and sound legal credentials for them to have entrusted her with this big job.

This should serve as an eye-opener to all and sundry, especially Gambian women that there is always hope as long as there is life.

If one has faith in whatever he/she is doing, there is always a reward awaiting him/her provided that person is also dedicated to duty and hardworking.

On the other hand, if people conduct themselves with irresponsibility and carelessness, they should not expect a good reward in the future, unless they choose to change the way they comport themselves. Otherwise, it is the other side of the coin which will always live after them.

Power comes and goes, so it is wise for holders of power to use it wisely for the betterment of society.

Riches perish, undeserved fame evaporates like a vapour, but a good name backed with solid achievements is unassailable.

We have faith in Fatou Bensouda’s ability to carry out this task with utmost efficiency and unquestionable integrity.

We wish her the best of luck, and call on all Gambians to pray for her to succeed because her success will enhance the image of The Gambia.

We need all the good we can garner from the international community.

“You become responsible, forever, for what you have tamed. You are responsible for your rose”. 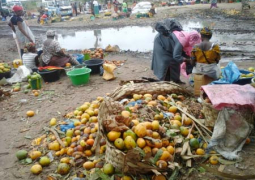