Members of 4Gambia Foundation, a charitable foundation officially registered both in Holland and The Gambia and currently sponsoring 37 students in The Gambia, on 27 September 2015 held their annual meeting with their sponsored students and their parents at the Kunta Kinteh Beach Bar and Restaurant.

The foundation, whose main aim is to give support to education, health and sports sectors, also gave students learning materials and other valuable items.

Geke Schotte, CEO of 4Gambia Foundation, in her remarks at the meeting, said the foundation started in 2013 to create opportunities for students that cannot pay for themselves.

It is not easy to have sponsors in Holland but because education is a human right to every human being her foundation is working hard to ensure deserving students get support, she added.

They want to help build a better future for students, she said, adding that education is a key aim to national development.

She said she used to collect materials from schools and private individuals in the Netherlands to support needy students in The Gambia.

She first came to The Gambia in January 2012 and was touched by the fact that so many children are out of school because their parents could not afford to pay for them.

“I am sometimes crying in my heart when I see children stay away from school,” she said.

She also said they would always urge beneficiaries of their sponsorship to make good use of the opportunity, as there are many students who need sponsorship.

The foundation has supported over 20 teams with sports materials, he added.

At Kerr Ngonan Primary School in North Bank Region the foundation did engage with the school authorities to build 2-classroom block for the school, he said, adding that they have also been rendering assistance to the health sector.

Falai Kamateh, a Nusrat ex-student whose senior secondary school education was sponsored by the foundation, outlined some of the support he had received from the foundation in pursuit of his education, for which he said he would ever remain grateful to the association.

Bakary L. Ceesay, a promising student being sponsored by the foundation, in his vote of thanks, said the foundation has been playing a pivotal role in their education to ensure they do not drop out of school.

He therefore thanked the foundation for its love and support to needy students and the nation. 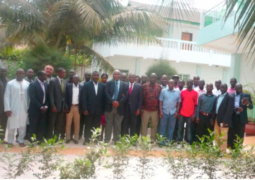