Three big guns in the names of Julangel, Ron Mango and Linguere are all but out of the ongoing league cup championship in Bakau following their shocking elimination in the hands of their respective opponents as the competition enters semis.

But first it was Bakau New Town outfit Linguere that was sent packing amid poor quarterfinal showing that has seen them succumb to a 1-nil defeat to Magadan in a bitterly-fought encounter at Real de Banjul Football Field last Friday.

The defeat means Linguere, who have failed to make any significant impact in the Bakau Nawetan in the last couple of years, are left with knockout competition to fight for.

The reigning champions (Ron Mango) lost 1-nil to in-form side at the weekend, while Julangel lost 2-nil to Luniburg who also eliminated them in the same competition in the last couple of years.

The other league quarterfinal game between Kachikally and Zuwa FC failed to proceed last Wednesday due to unavailability of the security personnel.

The Bakau Zonal Sports Committee, Pointsport can confirm, has fixed Monday 21November for rescheduling of that tie.

The winner in that encounter will meet Magadan, who are already through to the semi-final stage, while meet Luniburg in the other semifinal game of the league campaign at Real de Banjul field in Bakau.

Bremen Border were locking horns with Zuwa FC at the time of going to press yesterday evening  with in-form Milan and Zibra’s match expected to follow today. 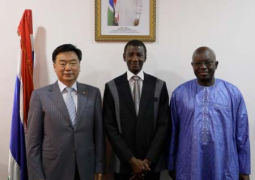