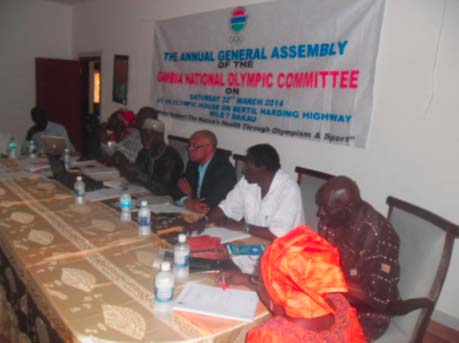 The meeting witnessed by 19 of 24 sports associations, also witnessed the reconciliations of some heads of associations to the GNOC which is seen as the way forward for the development of Gambian sports as well as athletes’ benefits.

The reconciliation came after a misunderstanding which took place between some associations with the GNOC in the past.

It also witnessed the approval by the general assembly for the recognition of Tug of War as part of the Gambian sports associations.

Addressing the assembly, GNOC president Alhagie Momodou Dibba said the 2011 election gave him the opportunity to fulfilling his 10-point agenda, which was a promise to NSAs.

The AGM also recognized the support of both the executive board and the national associations that gave rise to his re-election to another full term, while the gathering called on all associations to enable the GNOC achieve the desired objectives of the Olympic movement in The Gambia.

Referring to his election victory as a victory for the sporting fraternity, Dibba stands in unity with others to strive for improved performance for sports development in the nation.

Speaking further, Dibba revealed the upcoming developments which shall be utilised to further consolidate the gains already registered.

He said the GNOC’s executive board would continue to give the necessary guidance and support to national sports association to improve on their performance for sports excellence and development of athletes.

He added that it shall also include ensuring that administrative and technical courses for national sports associations are intensified during the quadrennial 2013-16.

The developments also include with the inspiration and encouragement of young entrants in the executive board for the leadership role in the activities of the board as well as the continuity of the harmonization of the then relationship with all national sports associations to enable them take advantage of the benefits that the executive board is able to offer.

He further emphasised the extension of the their collaboration with sister NOCs, international federations, the Islamic Sports Solidarity Sports Federation, ANOCA, ANOC and Olympic Solidarity to mobilize resources for the development of sports in all its facets in The Gambia as well as giving support for the effort of high performance Gambian athletes to excel in their quest to bring glory to the Gambia and maintaining the GNOC as a reliable component and forward looking workforce relevant to its desired aims and objectives among others.

Delivering the 2012 financial report, first vice president Abdoulie M.B. Jallow said the GNOC’s net asset dropped by 3.5% from D15.50 million to D14.96 million, adding that the main contributors of the income being grants from the Olympic Solidarity, which constitutes 34.69% of the annual income totaling D9.77 million.

Jallow further states the grants as meant for the administration of the NOC, preparation of various games, capacity building, and support to associations and youth development through the Olympafrica Centre.

In the implementation of the GNOC’s mandate, it incurred expenses totaling D15.00 million, thus a slight deficit of D44,633 as the year ended against a surplus of D466,216 in the previous year.

In 2012, the GNOC was able to support twenty-three associations, he said.

He further stated that the current assets to have increased from D863,088 to D1.09 million was mainly due to outstanding refunds sponsored travels per-financed by the NOC and technical courses.