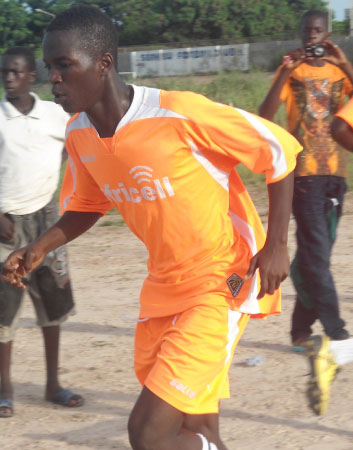 Zuwa FC star player Bubacarr Camara is completely ruled out of Thursday tie against Milan after the winger pulled out of his side’s recent friendly match through muscle injury.

The young midfield sensation, who played a major role in his side’s energetic 1-nil win over much fancied Vidar last week, was involved in a training ground collision with Tos Actief’s goalkeeper few days ago.

He was immediately stretched off the pitch with serious complaint of a knee problem but after undergoing a thorough treatment, it was confirmed that the player has sustained a muscle pain which is expected to keep him on the sidelines for a while.

It is not clear when Camara is expected to return to action but the club medical staff have dismissed reports that their star man could be set for a lengthy spell on the sideline.

It is so obvious that the skillful prodigy will certainly be unavailable for the crucial tie with Milan in two days’ time.

The news has come as a big blow for the team’s hope of securing their second win having only managed one win in two matches in the campaign so far.

Camara, a key member of the Zuwa FC side that booked their place in the finals of last year’s Bakau knockout competition in what was the club’s first debut, was also very much instrumental in helping the Bakau Newtown youthful side claim the Super Cup titles following their 1-nil win over rivals Ron Mango three weeks ago.

He was handed his first start to the campaign and did enough to help his team secure their first victory at the expense of Vidar, which came hot on the heels of a disappointing 1-1 draw with newcomers Farokono a fortnight ago.

Camara, who also plays for Steve Biko youth team, began his Nawetan career with Luniburg, a Nawetan team in Bakau Newtown, in 2009.

Having failed to hold down a regular first team place with the team, the young attacker decided to switch allegiance to the neighborhood club Zuwa FC and has since developed into becoming a key figure with the team.