The newly established Nawettan team, called Zuwa FC has made history by becoming the first team to book a place in this month's summer championship, fondly called Nawettan.

The Bakau New Town outfit laid a hard fought encounter and in the process secured a dramatic 6-5 penalty shoot-out victory over experienced Magadan side at the Bakau Mini-stadium Stadium on Wednesday.

Following a pulsating and entertaining goalless draw in the regulation time, both sides had to be settled on a post-match penalty shoot-out.This occasion was believed to have left Zuwa FC in dismay, as they nearly hang up their boots after missing an opportunity to level their advantage during the penalty shoot-out.

But the situation turned out better for them when Magadan captain failed to take advantage of a score win opportunity and smashed the ball away to deny his side from celebrating what could have been a famous victory for Bakau outfit.

The heroes of the match were Zuwa FC duo playmaker Saihou Conteh, and of course, the impressive goalkeeper Musa Touray who occasionally rescued his side while they were in crucial moment after a string of world class saves.

Touray was undeniably the most important player in Zuwa's team, and his magnificent performance was rewarded with a standing ovation as he walked towards crowded supporters immediately after the final whistle was blown.

The team under the leadership of the man at the helm of affairs whom the team was named after, Yankuba Jammeh is expected to continue to lead Zuwa FC as they resume training ahead of their biggest taste in its football history when the Nawettan takes centre stage later this month.

Bremen Border's game against Sanchaba United will go ahead as scheduled, as the two sides look set to rub shoulders later in the day at the Bakau Mini-stadium.

Meanwhile, at the time of writing this report yesterday, Smiling Coast were entertaining Oslo United. The fixture is expected to be followed by the postponed game between Rakel FC and Vietnam Border on Sunday to wrap-up the play-off matches. 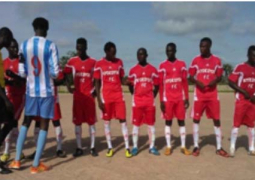