The Point has learnt from the Kanifing Municipal Council that the famous Youth Monument Bar and Restaurant at the busy West Field Junction has been temporarily closed down.

The issue of the monument, which was first raised during the 2008 National Youth Conference and Festival (NAYCONF) held in Farafenni, North Bank Region, has in the recent past, generated a lot of controversy.

Confirming the closure to our reporter yesterday, Pa Kalipa Sanyang, Public Relations Officer at the Kanifing Municipal Council said, “Yes it is true that the Youth Monument Bar and Restaurant has been temporally closed until further notice.”

According to him, the place has been closed temporarily until “certain things” are sorted out.

“The is not about who owns it or not. It belongs to the Kanifing Municipal Council 100 percent,” he added.

Asked whether there are any plans to embark on another project at the place, Sanyang stated: “We cannot discuss that, as of now, until certain things are put in place, but I can confirm that the has been temporarily closed.”

Street vendors around the monument, who spoke to this reporter, expressed disappointment over the closure of the , noting that it is a busy area, which helps them to sell their goods. 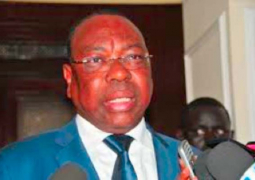