Al Jazeera’s press office has reported that “Al Jazeera’s bureau in Gaza has come under fire”.

A report released this week by the global television network said “Al Jazeera correspondents have collected large bullets from around the building, with other nearby buildings left untouched. No one has been injured.

We associate ourselves with the contents of a statement by an Al Jazeera spokesman, who said:

“The foreign minister’s comments were a direct threat against us and appear to have been taken as a green light for the targeting of our journalists in Gaza. We hold the Israeli authorities fully responsible. They have put the lives of journalists in danger.

“Our journalists have been doing an outstanding job in reporting to our mass audience in the region what is happening on the ground.

“A threat to one is a threat to all, and this is a dark sign for all journalists operating in the territory. Journalists must be protected while doing their job of giving the public information they have the right to know, helping them understand what is going on. Journalism is not a crime!

“We assure our audience that we will continue reporting all aspects of the events taking place, with the utmost professionalism, with commitment to the human side of the story. We will go on covering what is happening taking all necessary measures to ensure the safety of our crews.”

“If the freedom of speech is taken away then dumb and silent we may be led, like sheep to the slaughter”.

NAS FC, others sail to quarterfinal in Gunjur knockout 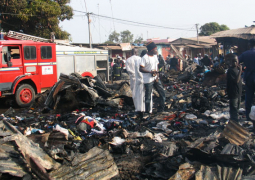