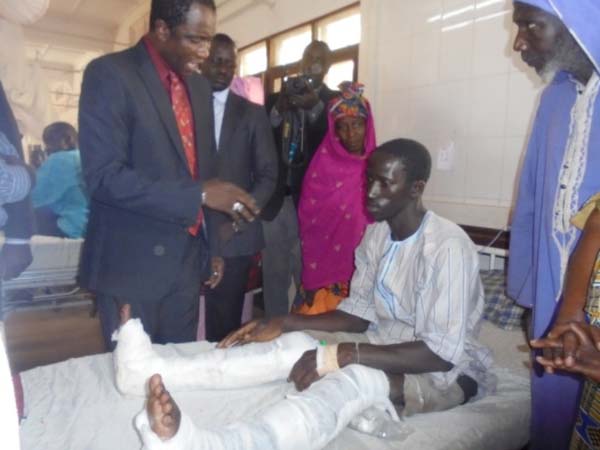 The minister and his delegation visited to show solidarity to the affected people and their families and the entire Gambian population.

A car accident occurred on Saturday evening in Kitty involving supporters of the coalition who were celebrating the victory of President Adama Barrow as the leader of the coalition.  At least 30 people were injured in the accident.

Mr Gomez said:  “Some of them [accident victims] are in critical conditions but the doctors are doing their utmost best.  I think I only saw one person who is in coma.  May God shower his blessing on all of them and give them speedy recovery.”

He told the victims that the government would do “everything possible” to investigate the reason behind the accident.

The Chief Medical Director of EFSTH, Professor M. I. Khalilu, assured the minister of their commitment to healthcare delivery and development of The Gambia.

He said the minister’s action was “a very good gesture”, saying: “this showed he is concerned about the welfare of the citizens and that is very important”.

Landing B Sanneh, general manager of National Enterprise Development Initiative (NEDI), said the Ministry of Youth and Sports “is very much concerned” as the custodian of the young people of The Gambia

“As such if anything like this happens, it will be a concern to the ministry and the minister in person to show solidarity to the affected people and their families,” he said.