Badinyaa one Family Promotions and Productions a local youth group in Brikama over the weekend conducted a day-long clean-up exercise at Brikama Health Center.

Speaking on the occasion, Alieu Darboe, national coordinator of the group, described the exercise as a genuine one, recounting that the exercise is the third of its kind his organization has rendered to the Health Center.

“The staff of the Health Center cannot do it all. They need the support of the community and that is why we have decided to lend a helping hand today,” he said.

Mr Darboe promised that his organization would soon replicate such voluntary exercises elsewhere needed as partners to the health sector.

Darboe further noted that the clean-up exercise is in preparation to the Bricks-Tone Fiesta which is scheduled to the 17th of February 2013 as all proceeds gained will go back to the facility.

“I am very confident that Badinyaa is a true organization as they have done a lot for the development of the facility,” he said.

He noted that the management and staff of the facility are very grateful to Badinyaa’s gesture of cleaning the center free of charge; stating that this is how someone contributes his/her quota to the development of a nation.

Other speakers at the exercise included Fatoumatta Conteh of the Brikama Missira Women Kafo, Mariama Saidy the vice chairperson of the association who all hailed the initiator Sulayman M.Sanyang and his coordinator for their efforts. 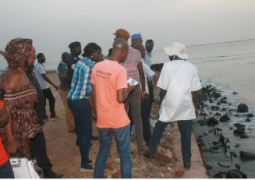