Gunjur continued their fine run in this year's zonal competition following their fierce fight to the finish with only nine men over their arch rivals Sukuta beating them 1-0, at the Serekunda West Mini Stadium.

The first 15 minutes were totally dominated by Sukuta who had a lot of goal scoring opportunities but they failed to capitalise on their chances.

In the 10th minute of the match Sukuta skipper Anfaal Jobe was one on one with the keeper but his shot was save by Gunjur's goalkeeper Ousman Darboe. In the 15th minute Nuha Darboe took a powerful long range shot which went over the bar.

Gunjur best opportunity came in the 22nd minute of play when striker Yusupha Barrow broke through the Sukuta defence and sent a thunderous shot that only just drifted over the bar for the second time within seven minutes.

In 38th minute of game Gunjur were reduced to 10 men after striker Pa Modou Jatta, alias Saviola, was red carded by the central referee Mawdo Jallow for bad play. The first half ended 1-0 in favour of the Southern boys of Gunjur.

As play resumed in the second half Sukuta continued to mount more pressure on Gunjur defence but all their chances were intercepted by Gunjur's formidable defence line.

In the 70th minute of play Gunjur's powerful striker and also the author of Gunjur's lone goal Yusupha Barrow was also sent off.

Gunjur put in a respectable performance in the dying minutes of the game and in the last minutes of the game skipper Lamin Darboe broke through Sukuta defence. He could not hit the net however and the game ended 1-0 in favour of the Southern boys of Gunjur. The victory saw Gunjur sail through to the semi finals of the ongoing Muhammed Yahya Jammeh's Super zonal Competition sponsored his excellency Professor Alhaji Yahya AJJ Jammeh and organised by GFA.

Speaking to Pointsports, the head coach of Gunjur, Lamin Kaku Jabang, said he was impressed with the performance of his boys despite the fact they only had 9 men on the pitch. He expressed confidence that his side will go far to the end of the tourney.

He thanked the fans for supporting the team during their matches and he also advised the fans to abide by the rules and regulations of the game.

For his part, the head coach of Sukuta, Seedy Barrow, said that his boys played brilliant football but they could not find the back of net.

He expressed optimism that his side will make it to the semi finals and he appealed to his fans to keep calm and the team will bounce against Bakau on at Serrekunda West Mini Stadium. 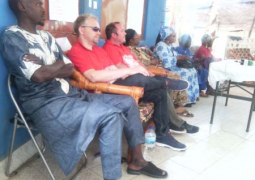