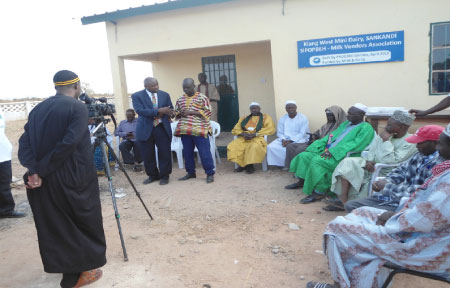 Livestock farmers have callon the authorities concerned to revive the department of livestock services in the interest of the livestock development in the country.

The farmers made the call recently during a two day information and sensitization forum for National Assembly members, media practitioners, local chiefs, and other livestock stakeholders held at Tendaba Camp in Kiang West, Lower River Region.

After serious engagements and intensive presentations, stakeholders were put into work to look at the animal health and production and natural resources management.

At the end of the plenary; key issues were identified by stakeholders which include lack of a fully fledge livestock services department, outdated livestock legislations policies and census figures and Resurgence of CBPP and other trans-boundary animal diseases and were followed by key recommendations that could help solve the problems.

According to the farmers, most of their cattle and small ruminants are dying due to disease outbreak and this has negative impact on the socio-economic development of the country, thus reduced animal productivity, which threatened the poverty reduction and household food security.

Dr. Sulayman Sonko, Animal Health Production Expert of PROGEBE Gambia, said according to analysis of policy frameworks and programs for the period 1991 to 2010, International Livestock Research Institute baseline report revealed that in order to ensure sustainable management of Endemic Ruminant Livestock (ERL) in The Gambia; certain things must be addressed.

According to him, issues that needs to be address includes poor access to animal health services in the regions and an articulated policy framework that will promote a public/private partnership to contribute to enhancement of the delivery of services to ERL actors.

He said that one of the most dangerous practice the findings revealed was the widespread use of counterfeit medicines to treat animals.

Noting that, the findings came up with key recommendation, one of which task the Ministry of Agriculture to formulate a comprehensive national livestock policy with well-articulated sub-policies and strategies including animal genetic resources, animal health, grazing land management and marketing.

Mr. Momodou Lamin Ceesay, Natural Resources Management expert, in a power point presentation, stated that poor rural communities depend on the environment and natural resource base for their livelihood without taking cognisant of wise use of the natural resources for prosperity.

“The fragility of the ecosystem and endangered nature of some of the existing biodiversity necessitates priority national action to rationalize the utilization and management of the flora and fauna,” he emphasized.

According to him, unclear land tenure systems, complicated by the nature of transhumance, limit the coordinated and efficient management of water and feed resources; and some of the statutes dealing with natural resources, livestock, diseases in animals and their control are outdated, whilst for some the resources needed for their implementation and enforcement are not available.

He said the sector is faced with a lot of challenges; such as scarcity of fodder and water during the dry season, exacerbated by widespread bushfires, are important constraints to cattle and small ruminant production.

Dr. Nfamara Bulli Sanyang, PROGEBE national project coordinator, highlighted some of the threats to sector which include the destruction of habitat vital as barrier to introduction of trypanosusceptible breeds, abandonment due to marketing and productivity constraints, increased in cropland at expense of natural vegetation and blockage of access routes to grazing land, livestock mortality, watering facilities and feed resource development /conservation.