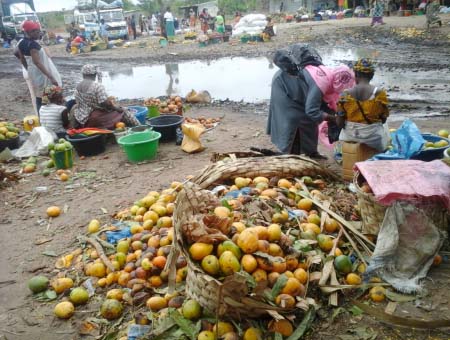 (Issue, Monday, August 22, 2016)
Mr Momodou Mbye Jabang and other horticultural scientists have been typographically drumming up concern about large amounts of fruit and vegetable loss during maturity and harvest.

It is estimated that up to 10% of the value of fresh fruits and vegetables is lost in the process of marketing (Fatajo, Hydara and Jabang).

One of Africa’s main challenges particularly in The Gambia is the processing and the preservation of fruits, let alone the fruit to get ripe, sell very few fresh of the harvest and tonnes of others rubbished.

Economic liberalization and institutional reform has reduced and redefined the roll of the state in agricultural service provision and the challenge is ownership by emerging private sectors.

The indigenous sectors, however, are reluctant risking investment even in standardized processing of fruits more so vegetables due to belief that the local market and consumers could discard their produce and go in for the imported processed products.

Fruit and vegetable farmers, the majority of whom are women, could however be encouraged to boost production through the provision of a mechanism that can quickly buy and adequately pay for their produce thereby encouraging them to produce more, and in turn buyers, to either process and preserve it for local and international markets.

It is therefore imperative for a modern fruit factory to be set up so that once these fruits are harvested, disastrous quality losses are averted and prevented from occurring.

There are two sides to the journey to agriculture, namely production and processing, so that the latter can maintain the quality of the fruit longer in the food chain before marketing.

The role of horticultural sub-sector in an economy cannot be overemphasized; however, expansion in the sub-sector is constrained by lack of a local processing factory for fruits and vegetables, leaving the producers frustrated and demotivated to increase their production acreages.

Having a heavy duty standby factory and efficient processing system is key in boosting production and enabling fresh farm products to be moved quickly to their salvation depot which is either the processing factory or preservative stores before reaching the market.

Mullins (2002) argues that fruits and vegetables are usually more difficult to market than to produce.

Not only the agricultural sector in most African countries received support in terms of investment and incentive measures but such support was mainly directed to export crops (Adedeji and Hussein, 1988).

Fruits and vegetables are highly perishable commodities. Their quality begins to deteriorate from the moment of harvest and continues throughout the marketing process. There is urgency in processing, packaging of these produce efficiently as quickly as possible to maintain their farm fresh value. The entire distribution process is geared mainly towards rapid processing, packaging here in The Gambia and marketing.

It is estimated that up to 10% of the value of fresh fruits and vegetables is lost in the process of marketing (Fatajo, Hydara and Jabang.

The quick processing of tomatoes, mangoes, oranges, melons etc., canning and bottling them in a Gambian factory would preserve their freshness and let them wait longer.

There are only two major monopolistic factories in the whole country involved in fruit production; yet they are not capable of buying and preventing tonnes of fresh fruits and vegetables from spoiling. And again, the handfuls of tonnes they are processing are sold at exorbitant costs.

Elaborate and fast marketing channels, facilities, and equipment are necessary for maintaining and enhancing the quality of fresh fruits and vegetables during marketing (Kohls et al., 1998).

The scanty literature on gardening in The Gambia stresses that the wholesome marketing of fresh fruits and vegetables are the major bottlenecks for growers to further expanding the garden sector.

Fruits and vegetables here in The Gambia are either eaten or a handful marketed fresh or else the majority of the produce becomes rubbished.

Generally, significant quantities of agricultural produce in The Gambia are not effectively marketed, for most have got zero value addition; therefore, the need to formulate effective and efficient marketing strategies that can enable producers to better market their produce through processing, packaging, bottling and canning is paramount and long overdue.

Fruits and vegetable gardening have always been an integral part of Gambian life, especially for women. Women have traditionally worked in communal or individual gardens primarily to supplement household diets and, to a lesser extent, to sell their surpluses in local markets. With recent liberalization of the economy and the increased demand for fresh produces in domestic and international markets, several private entrepreneurs have entered into commercial horticultural production.

As a result, horticultural production has expanded in the past decade to include heterogeneous producers ranging from small indigenous communal and individual farmers to commercialized large producers and cooperatives (Nagarajan et al., 1994).

The Government of The Gambia has identified the horticultural sector as a potential for earning more foreign exchange and creating additional employment.

Therefore, the Gambia government is encouraging private entrepreneurs to ship in factories to add value to tonnes of her horticultural crops for local and international markets, which eventually spoils annually.