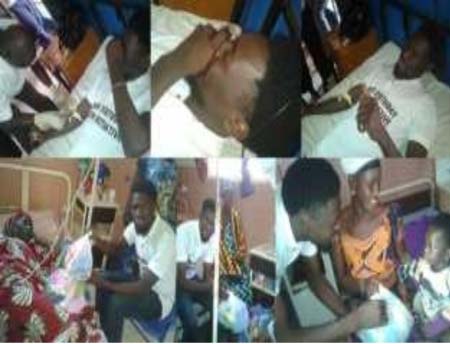 Your Change for a Change (YCFaC) on Friday celebrated all February birthdays by bleeding to save a life, at the Brikama Health Centre in Brikama.

The programme also witnessed the donation of food items to the patients admitted in the health centre by the group and a token of D1,500 from the Brikama-based uprising star ST.

Among the blood donors were The Gambia’s uprising artists, Bro K, ST, Brain Kracka, Vypa, among others.

Speaking on the occasion, Oumie Bah, a member, said they did it last year and it was successful and this year they targeted the Brikama Health Centre.

Ms Bah said going to the health centres, paying medical bills for the sick, giving them food items and donating blood mean a lot to them, adding that donating one pile of blood would save a life.

Omar Manjang, head of clinical services at the Brikama Health Centre, said blood was very vital in terms of medicine, adding that the group wasembarking on a worthwhile venture because the blood donated could save their own lives.

He said complimentingGovernment’s efforts was very important since government could not do it alone.

He also said it had been alleged that the hospitals sell blood and that was making people staying away from donating blood, adding that the allegation was false.

Ebou Corr, officer in change at the health centre, said they appreciated the efforts of the group because blood was their main constraint and in case of emergency, they always need blood.

He said when they have blood in the blood bank it would help them in terms of emergency, calling on other organizations to emulate YCFaC, so that they could have lot of blood in their blood bank to enable them deal with emergencies as quickly as possible.

He thanked them for the food items donated to the patients and for settling their bills as well.