The increasing number of drug-related cases in the country is worrisome, and a cause for concern for religious scholars, state and mental health officials, who all called for a concerted effort to curb the menace.

At a forum convened by the National Drug Enforcement Agency (NDEA) at the weekend on the drug situation in The Gambia, religious scholars among others dilated on the devastating effects of drug abuse.

The forum, which brought together panelist in the persons of Dr Omar Jah, deputy Vice Chancellor at the University of the Gambia, Reverend Gabriel Allen, secretary of the Inter Church/Inter Faith sub-committee of the Gambia Christian Council, SH Bakun, Director of Public Prosecutions (DPP) among others, was held at the Kainifing Municipal Council hall in Kanifing.

Dr Jah dilated on the types of drugs and their effects on human health, stressing that Islam prohibits drug abuse in its strongest term.

According him, much of the drugs used are detrimental to our health including mental health.

Noting that drug abusers become idle and a burden to the society, Dr Jah said the growing menace of drug cases is a cause for concern, and the society should help in that aspect.

However, he stated that government should also provide an alternative to youths who are drug abusers or addicts to engage themselves in productive ventures.

Dawda Samba of the WHO Mental Health and Advocacy Program described illicit drugs as a chemical substance that are taken without medical prescription, and have the ability to harm the person’s physical, mental and social health.

According to him, a study revealed that about 27,000 people in The Gambia have mental disorder.

Also speaking at the forum was Reverend Allen, who said Christianity forbids the use of drugs, noting that the consequences of drug abuse cannot be overemphasized.

“The drug abuse situation in The Gambia is indeed a very complex one, and the churches have a role to play in that regard,” he said, while calling for tighter legislation against drugs barons and producers.

DPP Bakum said the government has enacted stiff laws for both drug traffickers, abusers and producers all geared towards discouraging the scourge of drugs.

The public relations officer of the NDEA, ASP Abdoulie Ceesay, also gave a presentation on the drug situation in The Gambia, giving figures on the increase in drug cases. 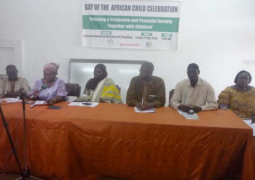