Press Freedom Day was celebrated yesterday throughout the world, an occasion to remind the world of the importance of protecting the fundamental human right of freedom of expression as enshrined in Article 19 of the Universal Declaration of Human Rights.

Here in The Gambia, the event was marked in the form of a symposium that brings together media practitioners, policy and law makers, religious leaders, international development and human rights institutions and civil society to debate on the theme.

We need not belabor much the significance of the day but to take the opportunity once again to call on government to repeal all laws repressive or oppressive to freedom of expression and press in a bid to create a more conducive environment for journalists. The government as a matter of priority should also re-appoint a minister of Communications, Information and Information Technology and Director of Press to serve as government mouthpieces.

These two offices will be of great opportunity for journalists to verify and confirm any necessary news. The government should also open its doors to all media houses especially the private media without discrimination, to enable the free flow of, and access, to information. Journalists should be allowed to cover state functions, get press releases and speeches by the President and ministers on time.

All journalists working for the public and private media should be treated fairly and without prejudice. Other African countries should follow the good example of not to jail journalists anymore because of their job. Press freedom is amply guaranteed by the constitution of the land. A conducive environment should be created between the government and the media by providing training for journalists, establishing a faculty of journalism at the , and reducing taxes on the printing materials since journalists also play crucial roles in society.

Journalists should not be seen as enemies by the powers that be, but as partners in development. It is high time for the authorities and journalists to have a round table discussion to trash out any mistrust or misunderstanding between them.

Finally, we appeal to government once more to reactivate the investigations of the gruesome murder of the late Deyda Hydara five years ago and the continued disappearance of Journalist Chief Ebrima Manneh of the Daily Observer who went missing since 2006. This will no doubt boost the country's human rights record and clear any doubts or suspicion.


"As a general rule, the freedom of any people can be judged by the volume of their laughter." 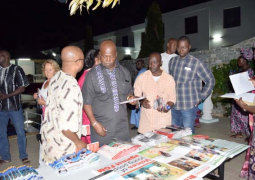