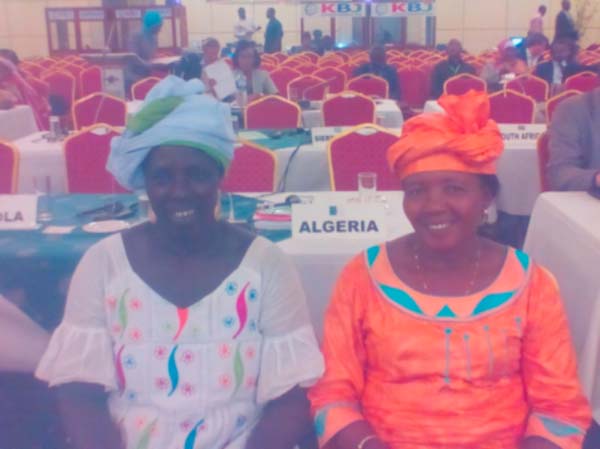 The African Commission on Human and Peoples’ Rights yesterday organised a panel discussion on the constraints to access water and land for rural women in Africa, including natural resource management.

The panel discussion was attended by women activists from all over Africa, and marked the AU celebration of the Year of Women’s Rights.

Held at the Kairaba Beach Hotel, the panel discussion was organised by the Working Group on Economic, Social and Cultural Rights, which was the committee set up by the African Commission on Human and Peoples’ Rights.

Fatou Samba-Njie from The Gambia, representing the National Women’s Farmers Association (NAWFA), speaking at the forum, said her organisation launched a campaign in collaboration with the Office of the Vice President for women farmers to at least get a hectare of land to be able to cultivate their crops.

She said the Women’s Act is also a legal document that guides rural women to gain access to land.

“In many parts of the country, women’s rights to land and property are a very sensitive issue. The unequal right to inheritance is still lacking in the rural areas based on gender discrimination in land reform matters, which often serves as a barrier to women’s equality,” she said.

She added that access to water is still a major constraint for rural women.

However, she went on, some government project interventions are really supporting some women garden groups, which is a great achievement.

“We have partnered with Actionaid and FLAG, which is a project launched on the campaign on women’s access to land and finance, targeting vulnerable women’s groups in the Central River Region (CRR).”

Victoria Serwaah Kankam from the Initiative for Gender Equality and Development Africa (IGED), an NGO based in Ghana, speaking at the forum, said in urban and rural communities across Africa, women are struggling to own, access and control property due to gender discrimination.

She noted that in marriage and family relations, women’s right to property is often subject to the authority of the husband, father or son.

Thus, this situation both reflects and deepens gender inequality and leaves women far more vulnerable, as the reality severely affects women’s abilities to live meaningful lives along with their families and communities, especially when their lives were affected by war, disaster and lack of economic opportunities.

She said IGED Africa has been engaging in intensive awareness raising and capacity building on the subject, among women and girls, on the Maputo Protocol with special focus on Article 21, at the community and national levels in Ghana.

“We build the capacity of state and non-state actors, including the media, women and gender agencies,” she said.