The plaintiff, Lena Gomez, was asked to get into the witness box to tell the court what transpired between her and the former alkalo.

Because of her age, Magistrate Jobarteh asked her to use a seat, after she swore on the Bible.

In her testimony, she told the court that she lives at Kotu and she knows the defendant.

She said there was a time when her child got sick and she took the child to Guinea Bissau for treatment, adding further that when she returned, she found out that the defendant had sold her plot of land without her consent.

Lena Gomez said she reported the matter to the present alkalo, who confirmed to the defendant that the said plot of land belonged to her.

The old woman told the court that the buyer of her plot of land was taken to KMC, and the said buyer said that the defendant’s father, Karafa Camara, sold the land to him.

Lena Gomez added that the buyer was advised to return the land to her, further stating that she took the buyer to Bakau but he failed to appear.

The plaintiff, Lena Gomez, further testified that the buyer failed to appear at the office of the Ombudsman, but the defendant appeared.

She adduced that the defendant was asked what he knew about the said plot of land, and he said that the land was given to the old woman by his father.

The plaintiff stated that the defendant’s father had issued her with some documents, adding that the KMC also issued her with a certificate of occupancy and receipts showing payment of rates.

The said documents were shown to the defendant and was asked whether he had any objection to the tendering of the documents.

The defendant, Momodou Lamin Camara, said he was objecting to the tendering of the documents, stating that they did not bear his father’s stamp.

Magistrate Jobateh overruled his objection, and admitted the said documents as exhibits.

The old woman finally told the court that she wanted to know whether the defendant or his father sold her plot of land.

Under cross-examination, the defendant put it to the plaintiff that his father did not sell the land to her.

Lena Gomez maintained that the defendant’s father sold the land to her.

The defendant again put it to the plaintiff that the documents did not bear his father’s stamp.

“You know very well whose stamp is on the documents, after you have demolished my house and killed my pigs,” the old woman replied. 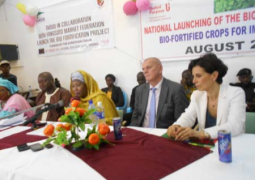 From zero to hero