The Brikama Magistrates’ Court presided over by Magistrate Ebrima Jaiteh recently acquitted and discharged one Adama Sanneh, on a chargeof obtaining money by false pretence.

Delivering the judgment, the trial magistrate said the accused, Adama Sanneh, was charged on a single-count of obtaining money by false pretence.

The particulars of offence were that in the month of February 2012 in Busumbala village in the Kombo North district of the West Coast Region, she obtained the sum of D18, 000 from one Modoupeh Betts with the pretext that she had a plot of land situated at Busumbala village measuring 24x12m for sale, which information she knew or believed to be false.

The accused person, he went on, was arraigned before the court on 19 May 2015, and she pleaded not guilty to the charge.

The facts relied upon by the prosecution were sufficiently elicited from the testimonies of the witnesses.

“I have carefully followed the proceedings and read the testimonies adduced in this trial, where the prosecution alleged that the accused person, Adama Sanneh, obtained money by false pretence.

“It is a cardinal principle in criminal cases that the legal and evidential burden of proving every element of the offence beyond reasonable doubt lies on the prosecution.”

Although, he continued, the prosecution could do so by either direct or circumstantial evidence, the law requires that in either case the prosecution bears the legal burden of proving all the elements of the offence necessary to establish the guilt of the accused beyond reasonable doubt.

“I therefore, hold the strong view that to succeed, the prosecution must lead copious, cogent, compelling and unequivocal evidence which linked the accused as the woman who committed the offence.”

The prosecution, therefore, had the unshifting burden of proving all the ingredients of the offence with which the accused had been charged, he said.

With regards to the first issue as to whether the accused person received D18, 000 from Modoupeh Betts is in dispute, as alleged by the prosecution on the face of the charge sheet.

The accused, in her evidence-in-chief and under cross-examination, admitted to receiving the sum of D15, 000 from Modoupeh Betts being the cost price of a plot of land sold to Modoupeh.

On the other hand, Modoupeh Betts, in his evidence-in-chief, also admitted to paying D15, 000 to the accused for the purchase of the said plot of land.

Since the sum of money received by the accused was D15, 000, the second issue was premised on whether the accused received the sum of D15, 000 from Modoupeh Betts by false pretence.

The accused admitted selling a plot of land to Modoupeh Betts, and gave title deeds to that effect.Modoupeh Betts stated in his evidence-in-chief that he obtained title, land transfer documents like the Alkalo land ownership document, a sketch plan, physical planning land use report and receipts of tax and rates paid.

The prosecution tendered photocopies of these land documents for identification to the court, and the documents in their nature were authentic.

The accused at all material times wanted to refund Modoupeh Betts the sum of D15, 000, and denied the allegation of obtaining money under false pretence.

“There is no credible evidence before this court showing that the accused obtained money by false pretence, and my mind is clouded with doubt as to whether the accused person actually sold a plot of land to Modoupeh Betts knowing or believing that is false.

“At this stage, I am convinced that the evidence led by the prosecution does not prove the second issue with the certainty required by law.

“I hereby order that the accused, Adama Sanneh, must refund the sum of D15, 000 to Modoupeh Betts on or before 6 August 2015 and the D15, 000 must be paid through the cashier of the court,” he further stated. 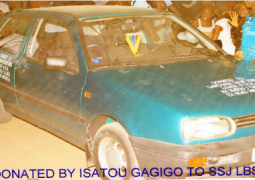