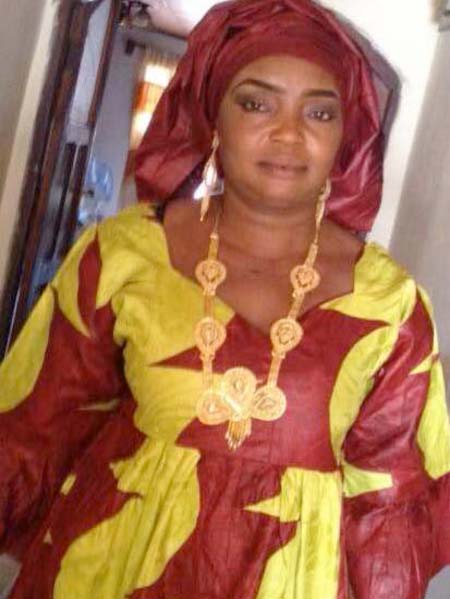 Ida Beyai, a woman accused of insulting Mandinkas by an angry mob in a video posted on social media sites last week, has cleared the air about the incident that lead to the posting of the video.

The woman, a resident of Kotu Quarry, said she was at Jimpex area on Thursday with her daughter, Abibatou Gibba, who was with her 11-month-old baby boy, to buy some building materials.

According to her narration, as the she and her daughter came out of one shop to go to another to buy the remaining things they wanted, an elderly man told her, “your dress of our president is nice”.

“I replied to the man, saying ‘Jammeh is our president,” Ida said, adding: “It was then that a young man who was nearby interrupted us, saying, “you people are calling this dog your president; all of you are dogs.”  Then I turned and asked him who he was referring to and he said he was referring to us and he suddenly started to insult me and my parents, saying if I am not careful he will, “beat me up.”

According to Ida’s narration, it was at this point that another companion of the young man came to the scene to inquire what was the problem and the boy told him that she, Ida, was insulting Mandinkas.

The boy also started to insult the woman and called their other people, some of whom came with iron bars to attack her.

“The only time that a tribe was mentioned was when I told the boy who started the whole thing, “you are insulting me but you will know that I am a pure Balanta, and the boy also replied that he was a pure Mandinka,” Ida said.

Meanwhile, as the young men rushed to the scene to attack the woman, she was rushed into one of the nearby shops.  The boys never left; they stood outside the shop waiting for the woman to come so they could attack her.

After about two hours, two-tough looking, muscular men came to the shop and became the Good Samaritans of the woman.  Their arrival also coincided with the passing-by of a police officer who also came to the scene.

Two muscular men and the police officer escorted the woman, her daughter and grandson, and took them to a taxi back home.

Ida said as they were escorted to the taxi, the young man who started the whole thing took out his mobile phone and started to film them.  As the boy was filming the woman, who was walking side-by-side with her saviours, he was also recording his voice alongside the video.

In the 47-second video which was posted on YouTube, shared on Facebook and viewed by several hundred people, the boy said the woman was insulting Mandinkas and they, the boys there, wanted to deal with her but they could not because of the people who escorted her.

“What the guy was saying in the video is total lies,” Ida said, adding that she cannot insult Mandinkas or hate Mandinkas when almost half of her relatives are Mandinkas.

“My best friend, Nema Demba who lives in Bakau, is also a Mandinka,” she said.

Later on, the woman and her husband, Sisawo Gibba, went back to Jimpex with a police officer to find the young man but he was nowhere to be seen.

Meanwhile, Ida’s daughter, Satang Gibba, said some people are taking political differences too personally and too far, saying that belonging to a different political party should not be a source of trouble in society.

“Personally, I have been friend with the daughter of OJ Jallow, called Safiatou Jallow, for more than 15 years and she knows I don’t support her father’s party or even the coalition but that never affected our friendship,” Ms Gibba said.

“Despite our political differences, we move on as friends.  The only time we talked politics was on the day of the election, December 1, when she called me on phone to say they – the coalition – was leading the polls.  Later on, after the result was completed, I called her back to congratulate her on the victory of the coalition which her father is part of.”

Ms Gibba called on the police to investigate the incident because such a thing should not continue unchecked.

“My mom would have been seriously injured or even killed if not for the two men who saved her by taking her to a taxi to go back home,” she said, while thanking the two men for being Good Samaritans to her mom.

Efforts by The Point newspaper to get comment from the young man who allegedly engineered the whole thing proved futile.  Ida does not know his name and the people who may have witnessed the scene declined to tell this paper anything about the man.  The man could not also be identified through the video.

Book Review: Sweet Water and Bitter: the ships that stopped the slave trade, Sian Rees, Vintage Books, 2010 The story of the end of the obnoxious Trans-Atlantic Trade