Two witnesses were Friday recalled at the Fertilizer Commission, sitting at the High Court premises in , to shed light on some of the issues.

Pa Habibou Mbye adduced that they have the mandate to investigate the quality and the quantity of the fertilizer.

Mbye also tendered a copy of the report, which he said was sent to the Office of the President.

“We were mandated to investigate the quality, quantity of the fertilizer and how it was distributed,” he stated, adding that the re-instatement of Mr Bakary Trawally entailed that he had done nothing.

Mbye added that they liaised with the farmers and experts to establish the quality of the said fertilizer, adding he (the witness) supervised the investigation, but he was not on the ground.

Chief Superintendent Biran Jobe, who was also recalled by the commission, submitted his report where he recommended that Seedy Jarju should be charged.

Jobe also told the commission that based on his findings, Seedy Jarju should be charged, stating that Seedy was not on bail, because he was not charged then.

According to her, she was employed at the Ministry of Agriculture since 1976, and she became the supplying officer in 2005.

She added that one Momodou Ceesay was the contractor of the fertilizer, but she was not part of the 15-15 fertilizer committee.

Ms Touray stated that she was part of 2KR committee in 2009, and other members of the committee included the then Permanent Secretary Dr Amadou Sowe and Bakary Trawally

The witness adduced that she was not aware of how the fertilizer was selected, stating that she met Seedy Jarju when Seedy was the PS at the Ministry of Agriculture.

She further adduced that her mandate was to evacuate and to sell the fertilizer, stating that it was the members of the committee that met and discuss the requirement for the fertilizer, and how it should be used.

The witness added that she did not attend meetings sometimes, except when they have arrivals, and that the consignment of this particular fertilizer was not shown to her.

Previous:
‘Office of President not of value to Halifa Sallah’
Next:
Opposition parties agree United Front 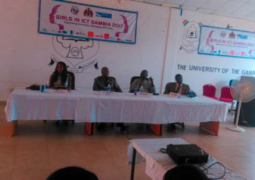