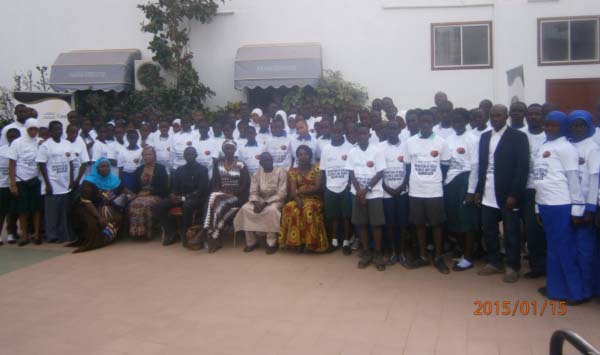 The Female Lawyers Association of The Gambia, FLAG, yesterday held a sensitization session for 100 Upper Basic School children in the Greater Banjul Area on the Children’s Act 2005 and Sexual Offences Act 2013.

It was held at the Paradise Suites Hotel in Kololi, focused on the prevention of sexual violence, as well as early and forced marriage.

The sensitization activity, which was funded by the Canadian Embassy in Dakar through the Canadian fund for local initiatives, (CFLI), was aimed at bringing the schoolchildren and their teachers to equip them with skills and knowledge, which they would need to be more proactive leaders on topics, procedures, and issues affecting them.

Delivering the keynote address, Ebrima Sisawo of MoBSE, said the forum was not only important and relevant, but was also timely.

This is the time MoBSE is currently reviewing the school curriculum, and believes that the feedback coming from the workshop would be critical in the assignment, Sisawo said.

He thanked FLAG for coming up with the workshop, adding that legal education in the form of a formal degree based on the form of law school is a platform for aspiring lawyers.

He said a general knowledge of law is a must for every person, because law affects all the issues that one is engaged in.

The ministry would collaborate with all stakeholders to provide support, as well as encourage many more of this kind of organized discussion, he continued.

To the students, Sisawo said the workshop is for them and, therefore, the lessons would help them to know their rights, but equally to know their responsibilities as well.

They also have a duty to contribute to the society, he added.

Neneh Cham, FLAG president, said FLAG was pleased to conduct yet another activity as part of their mandate to sensitize and educate all, particularly children on the law and issues that really affect them.

She said the theme of the day’s training course is the “Prevention of sexual violence and early and forced marriages.”

The Canadian Embassy in Dakar funded the training workshop, through their Canadian fund for local initiatives (CFLI), she announced.

The topic chosen is both relevant and needed, she said, adding that early and forced marriages both need urgent attention.

FLAG believes that education is the key to empowering children, and that they should be reached early.

It is vital to involve young people in this endeavour to fight against sexual violence and early and force marriages, she went on, adding that they targeted 100 school children, both boys and girls, from across the Greater Banjul area, to sensitize them not only on the issues of sexual violence, but also its relevance.

Philip Jatta, from the Social Welfare Department, said the department is the government institution responsible for the protection, prevention and promotion of their rights.

They recognize the contribution of their partner NGOs and the UN system, that have done a series of sensitization activities on radio, the television and at the community-level to create awareness in the public on the key issues affecting and concerning children of the country, he said.

The department of Social Welfare with support from UNICEF has set up community watchdogs on child protection, and the best interest of the child is what matters in everything they do, he said.